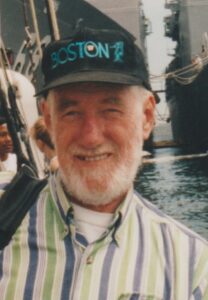 George J. Callahan III, 81, of Winthrop, died on September 20, 2019 at Marian Manor in South Boston. George was born on January 8, 1938 in Dorchester, the third of six children. He grew up in Dorchester participating in those activities familiar to those from Dorchester; skating at the Town Field, playing half ball on the street, visiting Franklin Park, etc. He was an expert gardener and kept his family in fresh vegetables during the summer months. He took piano lessons when a youth and became quite proficient. In addition, he was a talented artist and had a show at a gallery in New York City.

George graduated from Boston College High school, earned a BA from Boston College, and completed graduate studies at Boston College. He served his country as a member of the U.S. Army. After graduation he began his work life at United Fruit. He moved on to Paper Mate Pen where he played a role in getting Flair pens to market, and then to Revlon in various administrative and sales positions. In addition, he was an entrepreneur with experience in real estate and many of the skills related to real estate.

George spent most of his life living in the Boston area but also lived in Chicago, New Jersey, and Maine. As he grew older he became a proficient letter writer and reader and grew in his appreciation of many musical styles. He was a good neighbor and friend. His family and acquaintances enjoyed his quick wit and sense of humor, as well as his sense of irony. His faith was important to him; and towards the end of his life, he often said that he was at peace.

For those who wish to make donations in George’s memory, the family suggests Boston Health Care for the Homeless Program www.bhchp.org or a charity of your choice.