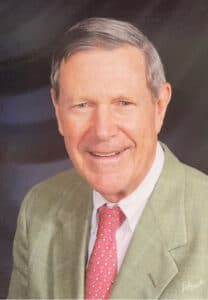 A. Brooks Parker III of Weston, Massachusetts passed away peacefully into heaven
surrounded by family on January 10, 2023. He was 89 years old. Brooks most
cherished his wife and partner of sixty-three years, Gale Tucker Parker. He adored his
three children — Julie Parker Baughan (Michael), T. Brook Parker (Joanne), and Reid
Tucker Parker (Brett) — along with his ten treasured grandchildren — Jay, Sam (Lexi),
and Owen Baughan; Brooks, Hadley, Devon, and Kendal Parker; and Will, Hugh and
Jake Parker.

Brooks was born in Syracuse, NY to Catherine Otis and A. Brooks Parker, Jr. He is
preceded in death by his parents and his brother, John Otis Parker.  Brooks spent most
of his childhood in Waban, MA and graduated from Newton North High School in 1951.
After earning his B.A. from Dartmouth College in 1955, he went on to receive an MBA in
1956 from The Amos Tuck School of Business at Dartmouth. After Dartmouth, he
proudly served as a Lieutenant in the United States Army in Germany.

He began his professional career in 1958 at the First National Bank of Boston and later
held positions at both Loomis Sayles and Fidelity Investments. In 1981 Brooks co-
founded Liberty Square Investments — an institutional investment management firm —
which he continued to build for more than a decade. He subsequently founded Parker

Capital Management Company along with his brother John.  Throughout his career,
Brooks was known for his conservative investment style and personalized approach.

Brooks was very active in the community as a member of both The Trinitarian
Congregational Church in Wayland, MA and The Moorings Presbyterian Church in
Naples, FL. He was a long-time member of The Weston Golf Club in Weston, MA and
The Royal Poinciana Club in Naples. Brooks was also a lifetime member of The
Mayflower Society.

Brooks was best known as a family man and loyal friend. He was extremely devoted to
his wife and children, always finding time to encourage and support them. He was an
avid tennis player and accomplished skier, teaching his children both sports and
passing along his skills and his passion.

Brooks devoted a good deal of time to attending weekly Bible Studies and was very
active in leadership positions for the Dartmouth alumni network. He enjoyed collecting
Imari porcelain, reading The Wall Street Journal, working in his yard, and finding a great
bargain at Filene’s Basement. For both Gale and him, Naples was their “happy place,”
where they enjoyed relaxing with one another and their extended family for more than
30 years.

In lieu of flowers, if inclined, please consider making a donation in Brooks’ honor to The
Dementia Society of America or to a charity of your choice. A private family memorial
service will be held at a later date.