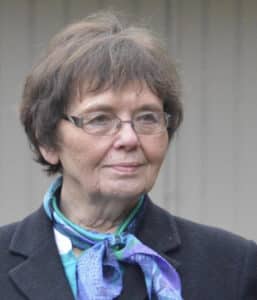 Adele Kraus, long time resident of Arlington Massachusetts, died of pancreatic cancer on September 1, 2022 at Care Dimensions Hospice in Lincoln Massachusetts. She was 85. In her last days and hours she was surrounded by her loving family and numerous friends. During the many months of struggle against the disease, she remained positive, focused on her blessings, and was grateful to all who helped her. She articulated that she had an interesting and good life, was not afraid to pass, but only sad to leave those she loved, especially sons David and Karl, daughters-in-law Heather and Susan, grandchildren Chloe, Will, Zephan, and Sofiah, and siblings Sandy and Dennis. She frequently celebrated the joy of daily phone calls with sister Sandy and emails with friend Pat.

Adele was born and raised on the family farm in Arlington Kansas. Her parents, Al and Esther Schmidt, were hard-working and community-service minded. Esther loved to host and cook for everyone and anyone. Adele did the same her whole life. A top student and musically inclined she excelled at the Piano, drums and marimba. After attending Hutchinson Junior College where she was co-valedictorian with her soon to be husband, Richard (Dick) Kraus she graduated from Kansas University, focusing on home economics and nutrition.

Adele moved with her husband Dick Kraus to Massachusetts in 1959 when he received a Woodrow Wilson Fellowship to attend graduate school at Harvard University. Adele began her career as a high school teacher. The couple lived in Cambridge for several years, and Taiwan for a year before settling in Arlington Massachusetts until their divorce in 1987.
Adele shifted her focus to history and social studies after participating in protests against the Vietnam War, and her involvement in civil rights, fair housing, and the National Organization of Women (NOW). She taught history and civics at Medford and Brookline High Schools before ending her career as a supervisor of student teachers for numerous Colleges and Universities including her alma mater, Simmons.

A longtime member of Harvard Epworth Methodist Church in Cambridge as well as several years at the Calgary Methodist Church in Arlington, she developed great friendships and immersed herself in service to the community, leading youth groups, participating in the establishment of a food pantry, serving as official and unofficial big sister, giving countless hours of her time. She never waited for others to help. She jumped right in. During the turbulent times of Apartheid in the 1970s, Adele invited Mxolisi Mgojo to live with the family while he attended college, avoiding an unsafe return to South Africa for the young man who soon became like another son and brother to David and Karl.

Politically Adele was omnipresent. Causes and candidates for local, state and national office benefited from her untiring efforts. She was particularly proud of her key role in helping Massachusetts pass the nation’s first universal health care law, the Health Care Reform Act of 2006. She hosted candidate coffees in her home, went door-to-door and made hundreds of thousands of phone calls. She served on Arlington Town Meeting and the Democratic Town Committee, and was a delegate to the Democratic State Convention several times.

Adele continued her musical interests throughout her life. Her Yamaha Baby Grand Piano was her pride and joy and it vibrated beautifully with her near professional concert level piano touch. She was an accompanist, including several years for the MIT Women’s Chorus and performed with many groups through the Winchester Conservatory of Music.

Above all else, she cared for her family, dropping her normal routine at a moment’s notice, to help her children and grandchildren. Her eldest grandchild, Chloe, has become an inspired baker by learning from the woman who was the pie-baking champion of Kansas. Through her retirement, Adele thoroughly enjoyed spending time with her grandchildren, cooking and laughing and planning the most special activities that suited each grandchild’s personality and way. ‘Grandma Adele is coming today’ always made everybody smile. Whether she taught them how to bake, or created a newspaper out of silly stories, putting on plays, or helped them nap when no one else could, Grandma Adele was their inspiration.

A memorial service will be held on Saturday October 8, 2022 at the Calvary Methodist Church in Arlington Mass. at 10 a.m.