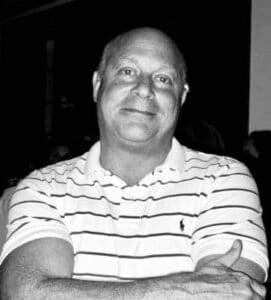 He was born January 2, 1958, in Chicago, Illinois, the son of Irwin and Elaine Berman.

Alan grew up in Cleveland, Ohio, and later moved to Lynnfield, Massachusetts, where he graduated high school in 1976.

He is survived by his former wife and mother of his children, Jane DeSanto.  He is the devoted father of Brian Berman and his wife, Justine, and his daughter Ashley Donohue and her husband, Stefan.  He is the loving “Bapa Alan” to Lulette, Vivienne, Emerson, Fitz, and Elliott.  In addition, he is survived by his siblings: Shari, Jeffrey, and Russell Berman.  Alan is also survived by his beloved best friend, Andrea Aprile.

Alan had a career dedicated to sales and management that began in the booming retail AV/appliance era of the 1980s.

Alan enjoyed cheering on the Boston Red Sox and the New England Patriots, collecting antique art pieces—with a particular interest in retro diners, and adoring his late labrador retrievers, Jake and Buddy.  One of Alan’s biggest passions and greatest talents was cooking for his friends and family, all of whom could not wait for his next culinary masterpiece.

A celebration of life for Alan will be held privately with close family (date and location to be announced.)
In lieu of flowers, kindly make a memorial donation in Alan’s name to his favorite charity, St. Jude’s Children’s Research Hospital.