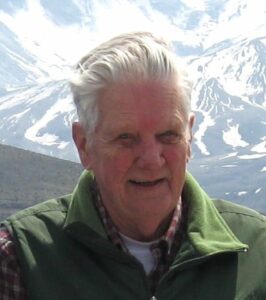 He was born May 3, 1926 in Chester, PA to parents John Earnest Chiquoine and Elizabeth Reinhard Chiquoine. Duncan graduated from Swarthmore College, though his studies there were interrupted by participation in the Navy’s WWII V-12 officer training program at the University of Chicago. When he returned to complete his degree at Swarthmore, he met his life partner, Isabel Kellers. The two were married in 1950.

Duncan received his Ph.D at Cornell University and went on to teach biology at Washington University in St. Louis, MO, Princeton University, Princeton, NJ, and Hamilton College in Clinton, NY, where he was a biology professor from 1966 – 1984 and also served as chair of that department.

Duncan’s intellectual curiosity led him to many pursuits–as seen in both his professional life and in wide-ranging hobbies. He was a pioneer in the field of electron microscopy, a lover of chess, HAM radios, computer languages, and whatever was the latest, fastest computer. His pleasure reading included mysteries and mathematical theory. Public libraries were his first stop in any town he visited.

His children shared many of these interests–and a love of fishing as well. The “Male Bonding Fishing Trips” in Canada with his sons and son-in-law were legendary for their big fish stories. Family reunions in Vermont, Maine, and New Hampshire gave everyone in the growing family a chance to sing along with Duncan and to learn his vast repertoire of old college pub songs.

Duncan is survived by Ibby, his wife of 65 years, his daughter Katherine Stamm and husband John-Paul, his sons: Stephen and wife Eleanor, Christopher and wife Nancy, Timothy and wife Jody, and Kenneth and wife Selinda. He also leaves 9 grandchildren who laughed at all of Duncan’s corny jokes, and 1 great grandchild. He also leaves his sister- and brother-in-law, William and Bertha Morehouse. He was predeceased by his brothers Arnold and John.

If you wish to make a charitable contribution in Duncan’s honor, please consider the Kirkland Town Library; 55 1/2 College St.; Clinton, NY 13323 or the public library in your own town. On-line messages for the family may be left by clicking below.