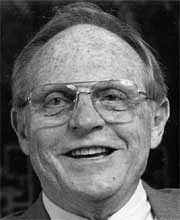 Born September 7, 1927, Allen Joe Moore was named after his two grandfathers, whom he liked to call the “heretic” and the “preacher.” He inherited the free-thinking of Pa Crider and the preaching enthusiasm of his Grandfather Moore. As an undergraduate at Southwestern University, Allen served as pastor of Gause and Milano Circuit and preached in revivals across central Texas, becoming known as the “Little Preacher.” He continued to blend pastoral ministry with study, completing an M.A. in sociology at Baylor University, focused on social pathology, and a Bachelor of Divinity at Perkins School of Theology, Southern Methodist University.

As a pastor, Allen was known as a “builder,” building congregations and physical structures in Texas towns of Mooreville, Rosenthal, Kennedale, and Moody. He soon became a leader in young adult ministries, serving over time as Executive Secretary for the Methodist Board of Education in Central Texas; Director of the Wesley Foundation for North Texas College and Texas Women’s University; and Director of Young Adult Work for the denominational Board of Education. In the latter, he and colleagues created innovative programs for young adults, including apartment ministries, travel seminars, workshops on values and sexuality, and ecumenical networks. They also produced “Faces,” a film that focused on the public and private faces of young adults.

Overlapping his church service, Allen earned a PhD in Boston University, writing one of the first dissertations in the United States on practical theology and graduating in 1963. During the Boston years, he served the Chestnut Street Congregational Church in Worcester, MA, and did clinical work at the Boston Psychopathic Hospital.

Upon graduation, Allen began his 31-year professorial career at Claremont School of Theology in California. There he redesigned the program in religious education and pioneered new courses for theological curricula: practical theology, communications, and human sexuality. During these years, he published two books, and more than 100 book chapters and journal articles, focusing on theology and culture. His first book, The Young Adult Generation, was based on interviews with young adults in sites across the U.S. and Europe. In the next years, Allen’s research and writing focused on family life, sexuality, homosexuality, and gay rights. In his last 20 years, he returned to some earlier themes, focusing on Christianity and popular culture; the social context of theology; liberation approaches to education; and the relationship between practical theology and religious education. During this period, he edited Religious Education as Social Transformation and a widely read essay on liberative religious education.

Allen was also an administrator in Claremont School of Theology, serving periods as Associate Dean of Students and Dean of Summer Studies. He was Vice President and Dean of Academic Affairs in his last eight years (the first as Acting Dean). He was also a leader in professional guilds, co-founding the Association of Seminary Professors in the Practical Fields (forerunner of Association of Practical Theology), which he served as first President, and the predecessor body to the Association of Professors and Researchers in Religious Education.

Allen is survived by his spouse, Mary Elizabeth Moore, and by his five children: Glenda Kittinger, Nanette and Mike Fox, Joyce Janette Cable, Clifford Laurence and Sheryl Mathews, and Rebecca Mathews. He is also survived by eight beautiful grandchildren and their families: Jason and Kristen Kittinger with their son Henry; Michael and Kristin Kittinger with their children Jackson, Adela, Ava Grace, and Ella Kate; Steven and Olivia Kittinger; Christopher and Kelly Fox with their daughter Tyler; Jennifer Fox Applegate and Rick Applegate with their children Devin, Robert, Trysten, Sophie, and Syrus; Curtis and Brandy Cable with their children Haley and Kiley; Kevin Cable with his son Robby; and Kylie Mathews.