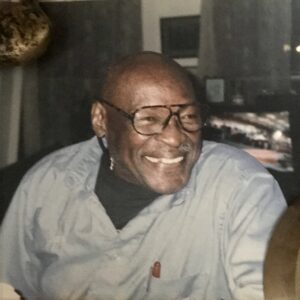 Almont H. Bracy Jr. died peacefully in his sleep on Tuesday January 25, 2022. He was the devoted father of Nicholas Bracy of Winthrop and Kenya Bracy of Lawrence and the loving grandfather of Autumn, Leila and Kingston Bracy.

“Bracy”, was born in Cambridge, Massachusetts on October 12, 1923, the son of Almont and Mabel (Cottman) Bracy. Raised in Cambridge and Oak Bluffs on Martha’s Vineyard, he spent most of his life collecting and selling used furniture, antiques, art and junk. He was most proud of the “junk” he picked up to sell at his shop while “scrounging” with his best friend Gerry Cooper. If he gave you a fair price and you tried to low-ball him, he would refuse to sell it to you, for any price at all, as a matter of principle. After staying at home for several years to raise his young son, he began a second career as a custodian at the Eliot & Pickett House on Beacon hill where his official title was Minister of Hospitality. Known in the Fenway as the Mayor of Kilmarnock Street, his shop was THE place to gather in the neighborhood, especially on warm summer evenings. You could hear Miles and smell patchouli long before you heard the jingle of his keys, saw the flash of his silver bracelets or were greeted by the twinkle in his eye, his beautiful smile and that deep bass voice. A renaissance man, Bracy was a collector, but never a hoarder; his rule was you had to let go of something you already had before you could bring in something new. He especially loved and was somewhat of an expert on African art, antique rugs and red wine. He could hear 30 seconds (or less) of any jazz record from any decade and could not only tell you its name, but who played which instrument.

In addition to his children and grandchildren, he leaves his beloved girls that he helped raise who called him “Daddy Al”: Jackie, Sharon and Cynthia (the baby!), his life partner and former wife Terri Powell Bracy, his daughter-in-law Samantha Murray and a large extended family of nephews, nieces (great and grand), and too many good friends to name for fear of leaving someone out.

He was predeceased by his parents Almont and Mabel, his siblings, Stella, Gladys and Billy, his son Richard and many good friends.

The Bracy family would like to thank the nurses and aides at Katzman Family Center for Living for the exceptional care he received during these last few years of his life.

A celebration of life will be held in a Fenway Garden during the summer of 2022.