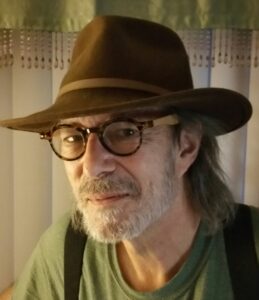 On March 10, 2018, Anastasios Karatza, 67, of Cambridge, Massachusetts, died peacefully at his home after a long battle with Cancer. He is survived by his wife, Diana, and daughter Anastasia Karatza, as well as the many friends and colleagues in the Greek and Rock music worlds.

Anastasios, known to many as Ernie Kamanis, was a true Renaissance Man. He was an entrepreneur, a carpenter, an artist, a true geek, well-versed in computers and networking, a cook, a wonderful husband, and father. However, he’s probably most well-known for his music, both in the Greek and Rock genres. Known primarily as a guitar and bouzouki player, he often connected more with music as a drummer.

He started young in the music world, forming his first band, the Rivets, at age 14. Always looking ahead, he made connections wherever and whenever he could, finally landing a job a few years later as a drummer (even though he was primarily a guitar player) for a band called Listening that had just been signed to Vanguard Records. Through his work with Listening, he made some connections with bands like Cream and Jefferson Airplane. Listening wasn’t where Anastasios was fated to end up, though. He met Andy Pratt and recorded an album with him on Columbia Records. The single released from that album “Avenging Annie”, became a hit, and was known for the unusual “backwards guitar” in the song, which was created by Anastasios! The song was later covered by many other artists including Roger Daltry of the Who. After a successful tour with Andy, Anastasios was contacted by Boz Scaggs to tour with him as his lead guitar player, along with Rick Shlosser, drummer extraordinaire. After touring with Boz for a few years, playing stadiums and venues in almost every city in the US, Anastasios had the opportunity to join the Edgar Winter Group filling in for Ronnie Montrose. He also did some studio work in Nashville working with many well-known musicians there.

He spent almost 20 years living out of a suitcase, and while tiring, it afforded him the opportunity to not only collaborate with musicians from almost every genre, but also just spend time with some of the guys he looked up to including Jimi Hendrix, Mitch Mitchell, Buddy Miles, the Chambers Brothers, Miles Davis, Rick Derringer, and more. He even took some time to do a little acting, and was in an episode of a locally shot TV series, “Spencer for Hire”.

After spending so much time away from family and friends in Boston, Anastasios came back home to start another chapter of his musical life.

He and his brother, George, were the sons of a foremost Greek Oud player and singer Costa Kamanis; together they formed a Greek band with Anastasios playing an instrument called the Bouzouki. Known as the Kamanis Brothers, they set the New England music scene on fire, breathing new life into this ethnic genre. Their huge success with various musicians (most notably Joe Kouyoumjian, Harry Bedrossian, Mitchell Kaltsunas, Leon Manoogian to name a few) at Raymond Bandar’s Averof Restaurant in Cambridge, Massachusetts helped the 1970s and 1980s become the Golden Era of Middle Eastern music and dance in New England.

Anastasios will be remembered for his immense talent and showmanship, his incredible sense of humour, his business acumen, and, above all his gentle spirit.