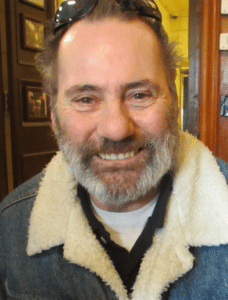 ANDREW “DAISY” ROMANIELLO of Stamford, CT passed away peacefully on September 20, 2022, at the Kaplan Family Care House at the age of 72 after a long battle with Lung Cancer. He was born June 23, 1950, to his parents the late Daniel “Daisy” Romaniello and Shirley Butts also of Stamford, CT. He is survived by two sisters Rose Brown and Sheryl Occulto and two daughters; Mandy Harrison, and Lillian Romaniello, and predeceased by step-daughter Tammy Nicastro-Savage and son Paul Romaniello. He is survived by five grandchildren: Autumn Pucino, Hope Pucino, Ethan Harrison, Rowan Romaniello, Alistair Waechter, and one great-grandchild London. Several nieces and nephews also survive: Frankie Toth, Lori Toth, Karla Tieri, Sherri Sisbarro, and Marlene O’Brien DeVille. He will forever be grateful for one lifelong friend, Gary Strain.

In his life, he wore many hats. His favorite was his Marine Corps cover which he earned serving in Vietnam as a Combat Engineer. Daisy didn’t understand the term “free time” as he was always helping out a friend, neighbor, or complete stranger. He was a mechanic and tow truck driver like his father before him and a jack of all trades who loved riding his Harley Davidson, fishing on the boat, and playing in pool tournaments. He could often be found at local Veteran Associations making sure everyone smiled, and volunteered his time at local food banks.

There will be a Memorial Service held next June, 2023 in honor of his birthday.