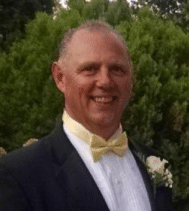 Andrew John Conrad of Wakefield, formerly of North Reading, July 2, 2021, age 57. Andy was the beloved husband of Beverly Marra Conrad, loving father of Abby and Barrett Conrad of Wakefield, devoted son of Mary (Lucci) Conrad of Raynham, dear brother of Stephanie Conrad Hamer of Andover and her late husband Paul and Michael Conrad and his wife Carolyn of Taunton. He was pre-deceased by his father, Richard Conrad and his brother Christopher Conrad. Andy is also survived by loving nieces, nephews, and many dear relatives and loyal friends.

Andy was a hardworking and skilled millwright and a longtime member of the New England Carpenter’s Union Local #1121 for over 19 years. He was extremely proud of the many major work projects he contributed to. Andy appreciated hours spent with his coworkers and union buddies.

Andy enjoyed attending family get-togethers and backyard barbecues with friends, including time spent at the Conrad home in Falmouth. An avid golfer, Andy delighted in a good game on the greens. He enjoyed playing hockey with friends at the Everett Men’s Hockey League. Andy also enjoyed cooking, attending car shows, getting his hands dirty repairing cars, fishing and watching some of his favorites shows from the comfort of his couch.

Andrew passed peacefully with his wife by his side at Sawtelle Family Hospice House in Reading after a courageous battle with cancer. Andy will be dearly missed by all who knew and loved him.

A Funeral Mass in honor of Andy’s life will be celebrated at St. Theresa’s Parish in North Reading Tuesday, July 27 at 10:30 AM. In lieu of flowers, memorial donations may be made to the charity of your choice.