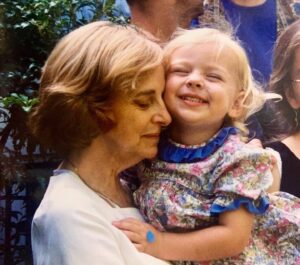 On Sunday, July 18, Ann Baehr , loving wife and mother and gentle soul, died suddenly at the age of 80.

Ann was born June 27, 1941 in Columbus, Ohio to Lillian (Hossinger) Witman and Gene Dewald Witman. She was raised in Mt. Lebanon, Pa., where she graduated from high school as a National Merit Scholar. There she was remembered by her fellow students as the voice of the morning announcements. She continued her schooling at Bryn Mawr College, where she graduated cum laude majoring in music. There she met a Haverford College student, Joel Baehr. A romance blossomed as they held hands singing in the Tri-College Chorus with the Philadelphia Orchestra under the direction of Eugene Ormandy. They married on December 29, 1962 and raised two daughters: Rebecca Hunter Baehr and Amy Ruth Baehr. Joel, Becky and Amy survive her.

Ann continued her education with a Master’s Degree from Wheelock College. She had a long career as an administrator, working most recently as the Assistant to the Vice President at Berklee College of Music in Boston, MA. Her Berklee colleagues remember Ann as joy to work with, a warm colleague who was responsive and diplomatic in handling challenging situations. She was important contributor to the success of the college at that time, and she received several awards for her work.

Ann had a life-long passion for choral music and musical theater. She sang in the Mount Lebanon Triple Trio, Bryn Mawr Chorus, Rochester Choral Society, Greenwich Choral Society, and Back Bay Choral, including much solo work as a soprano. At Bryn Mawr, she sang the role of Belinda in “Dido and Aeneas.” She sang and acted in several theater productions in Stamford, CT including “The Sound of Music” and “She Stoops to Conquer.” Her family fondly recalls her breaking into a pitch-perfect rendition of “How Do You Solve a Problem Like Maria” while performing mundane domestic chores.

Ann struggled with depression at times in her life. She met this profound challenge to her happiness with therapy, medication and fervent spirituality. She practiced Buddhism for decades and cultivated an active practice of meditation that augmented her natural inclination to care for people and the world. She practiced with her Sangha, where she found a spiritual home.

Ann was devoted to the cats in her life and spent many hours lovingly tending to her garden. She was an ardent Red Sox fan and had her own nicknames for favorite players. She loved elephants — a lot — and decorated her spaces with them everywhere she lived. Ann spent her last years caring selflessly and tirelessly for her beloved husband Joel, who suffers from advanced Parkinson’s Disease. Her care enabled them to remain in their home in Cambridge, MA.

Ann had an extraordinary capacity for generosity. She regularly bestowed small, thoughtful gifts on all who surrounded her – to the delight of her four grandchildren: Sarah Schrading, Lilah Schrading, Karl Basile-Baehr and Vera Basile-Baehr. The family gathered for her 80th birthday on June 27, and true to form, she presented gifts to everyone. Her charitable works and contributions are too numerous to detail here. Big-hearted to the end, she knitted and gifted a blanket to a newborn neighbor a few days before she died.

In lieu of flowers, the family asks that you bestow gifts in Ann’s memory to Cambridge Neighbors (https://cambridgeneighbors.org/), on whose board she served until her death, and/or the Natural Dharma Fellowship (https://naturaldharma.org/). A memorial gathering will be held soon and will be announced as soon as details are available.