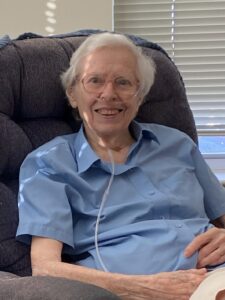 ROOSEVELT, ANN Ann Taylor Roosevelt died on July 6th after a brief illness. Born June 2nd, 1927, in Waterbury, Connecticut, Ann was the daughter of the Reverend Charles Lincoln Taylor, Jr., and Hannah Chamberlin Taylor. She was educated at the Buckingham School in Cambridge, Massachusetts, and lived at home while attending Radcliffe College, where she earned a degree in Physics. She moved to New York and taught science at the Brearly School. In 1948 she married Oliver Wolcott Roosevelt, Jr., of Lawrence, New York.

In 1950, they moved to Birmingham, Alabama, where Ann was active in the Episcopal Church, and busy with five children. She later became a bookkeeper and office manager. A music lover, she was active in church choirs, and attended thousands of concerts in the Birmingham area. She volunteered for many years at a radio reading service for the blind and print handicapped, and answering phones at a crisis call center.

After her husband’s death in 2007, she moved to Arlington, Massachusetts, enjoying a contented retirement of knitting, crossword puzzles, and televised sports. She will be remembered for her joy in her family, and her gentle, positive spirit. Ann is survived by four sisters and two brothers; her son Oliver W. III (Carol) of Clinton SC; daughters, Verdery of New York City; Laura Patterson (Jim) of Calera, Alabama; Nicky (Judy Jackson) of Berkeley, California; and Carolyn (Bill Gramby) of Cambridge, Massachusetts; grandsons Nicholas W. and Oliver W. IV; and one great-granddaughter.

A memorial service will be held Tuesday, July 13, at 3:30, at Emmanuel Church, 15 Newbury Street, Boston. In lieu of flowers the family requests that donations be made to the Taylor Fund of Emmanuel Church, Boston.