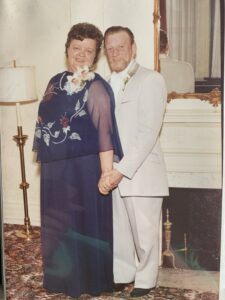 Annette Frances (Canole) Smith, a long-time resident of Everett and Chelsea, MA, passed away on April 13, 2020 at the age of 82. In 1955, at a local baseball game in Malden, she met her soulmate Joseph “Reggie” Francis Smith and they were married on January 20, 1956. They had six children and spent 28 years together until Reggie’s passing in 1984.

Annette looked forward to spending time with her family as they kept her going when life got difficult. She cherished every moment with them including the births of her grandchildren (and great-grandchildren) and teaching them to play Zelda, taking trips to various places in Maine and New Hampshire as well as being the best babysitter ever. Annette lived a short time in New Hampshire and grew a fondness for it that never left her. Every year she would look forward to the annual Smith reunion to spend quality time with her family. Always a shoulder to lean on and an ear to whisper to, Annette was a true matriarch and her family was always most important to her. For fun, she enjoyed collecting Santas and carousels as well as doing crosswords and word searches.

Annette is survived by her children, Hugh and Denise Smith, Mary DeGurski, Patricia and Kevin Canillas, Teri and Clifton Barchard and Amy Shaw and her grandchildren Michael Halloran, Patricia and James Brogley, Jennifer Cann, April and David Alpert, Pamela Smith, Kathleen and Edward DeGurski, Ryan and Marc Canillas, Timothy and Jessica Barchard, Kendra and Brandon Porter and Madison Shaw. She is also survived by her great-grandchildren, siblings, nieces and nephews and cousins and loving friends. She is predeceased by her husband Reggie, her son Joseph Smith, and her son-in-law Edward Angelo DeGurski Sr.

Her body was cremated by Boston Cremation, and a service will be held at the chapel there at 287 Main Street, Malden, MA 02148 on August 21, 2020 from 9:00AM to 11:00PM. Friends and family are respectfully invited to attend, however due to Covid-19 limitations will apply.

In lieu of flowers, the family asks that donations be made in Annette’s memory to the Alzheimer’s Association, as this cause was extremely near and dear to the family.