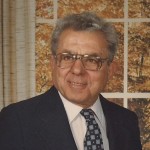 Anthony (Tony) William Citro of Belmont, Massachusetts a skilled craftsman, manufacturer and salesman in the manufacturing industry, died November, 28, 2012. He was 96. Tony was born at home on Prince street in Boston’s North End in 1916. He lived in Belmont since 1950. He was married for 58 years to Ruby Pearl (Pulsifer) Citro, of Nova Scotia, Canada. Tony and his wife Ruby were world travelers who had visited all four corners of the earth. Tony was the son of Italian immigrants Michele Citro and Christina (Petrosino) Citro. As a child and young adult, Tony was an active member of the Ellis Memorial Settlement House in Boston, where he met wife Ruby who pre-deceased in 1995. At age 12, Tony belonged to the Model Airplane Club and Model Yacht Club sponsored by the “Community Service Of Boston Incorporated”. He participated in outdoor model airplane meets at Franklin Field and indoor model airplane meets at the Commonwealth Amory. The model yacht club meets were held at the Boston Common Frog Pond. Tony attended Mechanics Arts High School in Boston and was graduated in 1933. He was a member of the track team as a 50 yard hurdler, and was a 1st Lieutenant with the 2nd Regiment 10th company of the Mechanics Arts High School Cadets. Tony was very active with the Boy Scouts Of America as a Scout, a Scout Master and later as a District Commisioner. He often awoke his children early in the morning singing revely. In 1935 Tony went to work at Artisan Metal Fabricators located at Sullivan Square, Charlestown, Massachusetts as a machinist and welder, he was hired as their first permanent young man with the firm. The company later moved to Waltham and became Artisan Industries. Tony was active in The American Society For Professional Engineers. He was a Professional Engineer and a licensed Real Estate Broker. Tony retired from working with Artisan after over 70 years with the firm at age 88 in 2005. Tony is survived by his sister, Albina Citro of Boston and Tony’s children, Michael Citro of California, Veda (Citro) O’Neill of New Hampshire, Linda (Citro) Genovese of Maryland and Robert Citro of Texas along with nine grand children, Anthony Citro of California, Dr. Brian Citro of Las Vegas, Christine (Citro) Maraccini of Las Vegas, Shannon O’Neill of New Hampshire, Laurie (Genovese) Siciliano of Massachusetts, Wendy Genovese of California, Hayley Citro, Nicholas Citro, and Emily Citro all of Texas and four great grandchildren Bruno Maraccini, Gianna Maraccini, and Angelo Maraccini all of Las Vegas and Sofia Siciliano of Massachusetts. There will be a private service for the immediate family. Donations are requested to be made to the: Ellis Memorial & Eldredge House, 95 Berkeley Street , Boston , MA 02116. http://www.ellismemorial.org/