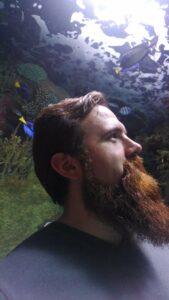 Aret Nahum Carlsen, 37, died at his home in Groton, Massachusetts, on November 10th, 2021, after a long run against cancer.

Aret, born in Cheney, Kansas, on April 11, 1984, was a gentle giant, a strong-willed, inquisitive, yet innocent soul, a traveler, inventor, mathematician, scientist, problem solver, and dedicated aquarium hobbyist. Always late, never early, yet even so, people loved him all the same. He completed dual Bachelor of Science degrees in Physics and Computer Science in 2008 at the University at Albany, State University of New York. He relocated to Wichita, Kansas, from 2008 to 2011, and thereafter to Groton, Massachusetts.

He will be remembered for his careful and kind temperament, his epic beard, his willingness to learn, and as an affable companion. The master of the silver-linings playbook.

He is survived by his siblings and their spouses: Leif Carlsen and wife Tori; Autumn Brubaker (Carlsen) and husband Craig; Svein Carlsen and wife Anais; in addition to their children and a vast extended family; his parents Gavin and Neil Carlsen; his wife Daisy Carlsen; his beloved fishes; and a cat, Lola.

We would also like to thank those among family and friends who ‘showed up,’ whether it be physically, emotionally, or otherwise, especially when the statistics were grim, and we all fought anyway: Allison Connery; Jerret Ross; Andy (AJ) Mullen; Lexi Halaby; Naomi King; and the Tarrant clan Kevin, Julie, Danielle, and Deborah Tarrant.

Finally, we want to thank his dearly cherished colleagues, fellow engineers, and friends at Veoneer/Autoliv, including Laura Ludwig, Stephen Osgood, and Andy Whitaker. His family at Veoneer supported Aret with incredible kindness, especially during his illness, and that support allowed him to fully realize his passions and talents with radar and automation. We are deeply grateful to the entire Veoneer family as they helped him to achieve his life’s dream, which was to work on self-driving cars.

Aret has requested no services. The best way to honor Aret is to keep your head in the clouds for a day, just as he did (sometimes on another planet, it seemed), and see where your heart takes you.