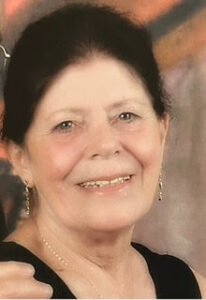 Arlene (Allen) O’Connor of Hull formerly of Rockland and Nottingham, NH passed away peacefully surrounded by family on December 30, 2022.

Arlene was born on July 13, 1939, grew up in Cambridge and graduated from Cambridge High and Latin School.   Beloved daughter of the late Donald and Claribel (Hall) Allen and sister to Donald “Micky” Allen of Maine and the late Emily Beekley and Anna Domin.

Loving mother to  Edward Gibbs and his wife Jennifer Barlow of Michigan, Lorene Reagan and her husband Chris of NH, Patrick and his wife Caryn of Hull, Timothy of Medfield, Olga Rich and her husband Al of Rockland, Matthew and his wife Michelle of  Abington, Peter of Whitman, Amy Perchard and her husband John of Hingham, Emily Liquori and her husband Nick of Hanover, Teresa Gregory and her husband Ryan of CT, Jonathan Allen and his fiancé Robin of Whitman and the late Annjeanette Dow of NH. Grandmother to Alexandria, Cordelia, Gwendolyn, Angus, Eleanor, Matthew, Caleb, Matthew, Clyde, Alannah, Hannah, Cody, Declan, Ellie, Cullen, Cecelia, Fiona, Piper, Teagan, Cameron, and great grandsons Beckett and Bradley.  She also leaves behind her furry companions Iggy, Wesley and Will.

As a single mother she raised her twelve children in Rockland.  Arlene was an avid reader and especially loved a good mystery, she passed her love of books on to many of her children and grandchildren.  She worked as a CNA in various nursing homes around the South Shore before retiring from Social Security in 2008.  She was the loving companion for twenty-five years to the late Edwin Curtis of Hanover, together they took yearly cruises and traveled to multiple countries around the world with her favorite being Wales.

Arrangements provided by Boston Cremation.  A memorial celebration will be held at a later date.