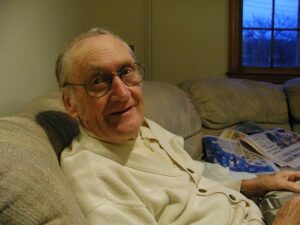 Arthur E. Lundbohm, passed away peacefully on April 3, 2019. He leaves his loving wife, of 69 years, Norma Lundbohm, of Peabody. He was raised in Lynn. He was the son of the late Oscar & Catherine (McGuire) Lundbohm. He raised his family in Saugus and Peabody. Arthur was a Veteran in the United States Navy, during WWII. He received a Victory medal. Arthur loved gardening, dancing, and listening to music. He was a member of the Knights of Columbus in Lynn.

He is survived by his 8 children, Ronald, Janet, David, Nancy, Kathleen, Diane, Steven and Brenda. He was the Grandfather of Amanda, Jennifer, Michelle, Kevin, Michael, Kelly, Gino and Rocco. He was the Great-Grandfather of Nolan. He was the brother of the late James Oscar Lundbohm and Bertha Smallis.
Services are Private.