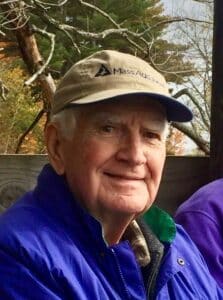 Arthur Patrick McGowan Jr., 85, of Ipswich MA, passed away peacefully at home on July 19, 2022 after a period of declining health.

Born in Hartford CT, on September 14, 1936, Arthur was the son of the late Arthur and Veronica (Haggerty) McGowan of Norwich CT. He was raised in Norwich and graduated from St. Patrick’s School and Norwich Free Academy. He went on to earn his bachelor’s degree in mechanical engineering from Worcester Polytechnic Institute in 1958.

After graduating, Arthur joined the Navy and his active duty was served as an Engineering Officer and Executive Officer aboard the USS Affray, an ocean-going minesweeper homeported in Charleston, SC. Following his honorable discharge, Arthur went on to attend the Columbus School of Law at The Catholic University of America. Upon receiving his law degree, he returned to Connecticut and joined the Hartford law firm of Halloran Sage where he became a partner and continued his career until his retirement.

In 1970, Arthur married Bonnie DuVal Waters of Annapolis, MD and they made their home and raised their daughter in Canton, CT. While living in Canton, Arthur served the town as Chairman of the Zoning Board of Appeals as well as on various charter and revision commissions. He also served as president and board member of the Canton Land Conservation Trust.

Arthur loved sailing and the ocean, and the family spent their summers at their beach cottage in Groton Long Point, CT where he captained their catboat, Serena. In addition to boating, Arthur enjoyed skiing, golfing and playing tennis. Over the years, numerous cherished friendships were fostered by a common interest in these pursuits. Arthur had many treasured memories that included ski adventures in Stowe VT and chartering sailboats with Bonnie and friends in the Caribbean. He was also a life-long musician and an avid reader of non-fiction with a particular interest in American history. Above all, Arthur was a loving and devoted husband, father, grandfather and friend.

Upon retiring from the practice of law in 2001, Arthur and Bonnie relocated to Arrowsic ME. During his retirement, he volunteered as a ski instructor with Maine Adaptive Sports and Recreation and served as a docent at the Maine Maritime Museum in Bath. In 2012, the couple again relocated to Topsfield, MA to be closer to their daughter and her growing family.

In addition to his wife Bonnie of fifty-one years, Arthur is survived by their daughter, Mollie M. Harb and her husband Rami of Ipswich MA; four grandchildren, Samir, Leila, Zain and Laith Harb; two sisters, Sheila Habeeb and her husband Louis of Norwich CT, and Virginia Hedrick of Farmington CT; as well as several nieces and nephews.

A private celebration of Arthur’s life will be held at a later date. Memorial contributions may be made in Arthur’s memory to Maine Adaptive Sports and Recreation or The Maine Maritime Museum.