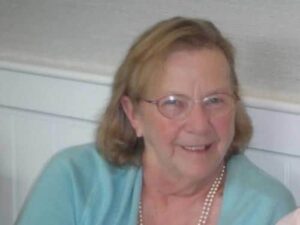 Barbara A. (Crowton) Belanger, 85 of Holden passed away on October, 4, 2019 at the Beaumont Rehabilitation & Skilled Nursing Center. Barbara was married for 49 years to the late Guy T. Belanger who passed away in 2002. She is survived by her daughter Kathleen Tyrrell of Jefferson, Susan Ciesluk and her husband Mitchell of York Beach, ME, Ann Moriarty and her husband James of Buzzards Bay, Robert of Worcester, Thomas and his wife Donna of Worcester and Carolyn Pestritto and her husband Michael of Hingham, 12 grandchildren, and many granddogs and great grand children. Mrs. Belanger was born in Worcester, daughter of the late James and Eva Crowton and the late sister Janet. After spending many years working as a private nurses aide, she worked more recently at JOANN Fabric in Holden working in one of her most beloved environments. Barbara was best known for her warm and fun-loving personality, passion for quilting, knitting, and keeping an eye out for inclement weather. Her favorite activity above all was spending time shopping with family. The family will be holding a private memorial at Worcester County Memorial Park, Paxton. There will be no calling hours. Memorial contributions in memory of Barbara may be made to the Dana Farber Cancer Institute, PO Box 849168, Boston, MA 02284-9168.