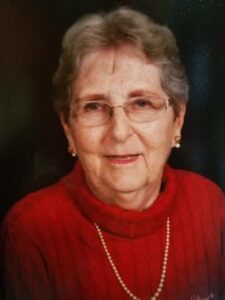 BARBARA REBECCA ELION BLAIR
Billerica, MA – Barbara Elion Blair, 85, died peacefully on October 19, 2019 in her home at Brightview Concord
River in Billerica, MA surrounded by family. She was born at Lawrence Memorial Hospital in New London CT to
John Elion and Frances Sussman. Barbara graduated from WMI in New London and attended UConn, but her
college experience was cut short when she returned home to care for her mother until her death at age 47. Rose
Elion began to care for John and they eventually married. Rose became a very good friend to Barbara over the
years. Barbara married Terry Blair in 1954 after he graduated from the Coast Guard Academy and they lived in
many different locations (including CT, MA, IL and Mexico) until their divorce in 1979. At that time, Barbara
graduated from X-ray school at L & M Hospital. She eventually graduated as a nuclear medicine technologist from
Rhode Island Hospital and moved back to work at L & M in 1981 until her retirement. She and Terry renewed their
friendship and lived together for many years until she moved to Billerica in 2017 to be closer to one of their
daughters. She loved being a mother more than anything but also enjoyed daily walks with Terry and their dogs,
travel, music, musing about the meaning and spirit of life and conversations with her very dear circle of friends.
In addition to her parents, Barbara is predeceased by her brother Norman Elion as well as her daughter Christine
Lee. She will be missed by her daughters Karen Blair of Hampden MA, Joyce Blair Emerson of Billerica, MA, and
Linda Blair Phelps of Arcata, CA; their spouses Jed Berliner, Bradley Emerson and Kevin Phelps as well as her
grandchildren, Scott, Christopher, Jay, Rebecca, Sara, Jessie and Justine; also Terry Blair and her wonderful
friends from Brightview, L&M and St. Luke’s Lutheran Church, of which she was a member for nearly 50 years.
A memorial will be held in her honor at St. Luke Lutheran Church in Gales Ferry, CT on Saturday November 23 at 11:00 A.M. In lieu of flowers please donate in her honor to your favorite charity.
Barbara would be pleased to be remembered that way.