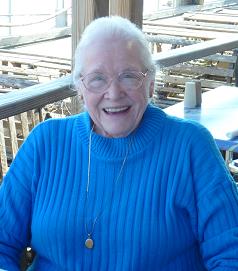 Barbara was born August 20, 1928 in Colebrook, OH. Parents were Theodore B. Waters and Edith E (Nims) Waters. She was married to Charles E. Noble II and she lived in Michigan for 25 years, before moving to Massachusetts. She retired at 65 from Massachusetts General Hospital in 1993. She enjoyed reading, walking and the outdoors, and traveling.

Barbara is survived by her two children – Charles (Patricia McPartlin)Noble III of FL, and Karen (Marshall) Kus of TX ; her brother, David(Patricia) Waters of NC; her 4 grandchildren – Elizabeth Kincaid of FL, Mark Wagner of TX, Jason (Jody Morrow) Kus of MI, and Sarah Noble of London, UK; and two great grandchildren; Ellen Kincaid and Jillian Kus as well as many nieces and nephews. ​Preceded in death by her parents, her sister, Elinor Holley, and brothers Allen Waters and Kenneth Waters.