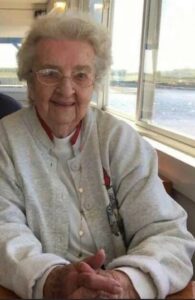 Barbara Jane (Marland) Lyon of Lunenburg, Massachusetts passed away peacefully on
March 5, 2021 just shy of her 100th birthday. She was born in Fitchburg, MA on May 22,
1921. The daughter of James and Doris (Lund) Marland, she enjoyed family life with her
beloved sisters Nancy, Dorothy and Mary. She graduated from Fitchburg High School in
1939. During her years as a Girl Scout, she formed lifelong friendships. Those Girl
Scout friends became “Comwoleis” and supported each other throughout their lives.

Barbara was a lifelong member of Faith United Parish in Fitchburg and participated in
her church in so many ways including the flower committee, Sunday school teaching,
couples club, choir, Our Father’s Closet, community suppers and more. Barbara married
the love of her life, Joseph B. Lyon, in October 1943. She loved to tell the story of how
he proposed to her. He was serving in the Navy and on a Monday asked her if she
would marry him on that Friday. They were married for 62 years. Joe served in the Navy
during World War II and they were apart for 2 long years. Upon his return from the
service, they built their home in Lunenburg and raised their 4 boys.

Barbara was a sweet and gentle person with never a bad word about anyone. She had
a wonderful sense of humor. She was always ready to offer her help. Saturdays were always a day for coffee with family and friends around her kitchen table. This was
something everyone looked forward to. Barbara was a great cook and holidays always
had a special meaning with her specialties being cooked including her creamed onions
and scotch kisses. Always an adventurist, she would wash her hair and jump on the
back of her son’s motorcycle for a quick ride to dry it. She loved traveling with Joe and
spending February in Puerto Rico, as well as enjoying vacations to the Caribbean and
Hawaii. She and Joe went white water rafting in their mid-70s on the Snake River.