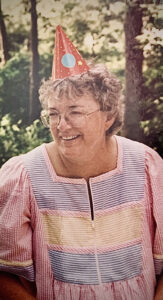 Bette Jean has joined her high school sweetheart for their last and greatest
adventure together. Bette (Jean) Benidt Hanson passed away September 22,
2021 due to complications from Congestive Heart Failure. She passed peacefully,
in her own bed and on her own terms, which is exactly the same way she lived her
life. She was born in Washington, DC on April 10, 1939 to Bernhard and Helen
(Terwisse) Benidt. Bette was the first of five children, followed by her siblings
Jane, Gail, Judy and, eventually, her brother Jim, who was 14 years her junior. The
family relocated to the Bay Area of California in the early 40s, where she grew up
a quintessential 1950s teenager. Bette attended Menlo/Atherton High School. It
was there she met and started dating Bill Hanson, the boy who would become her
husband of nearly 60 years. After high school, Bette earned her B.A. in Sociology
from UC, Davis. All through college, Bette and Bill stayed together and upon
graduation, the two married in June of 1961. So began their lifelong adventure.

Bette worked to help support Bill through graduate school and, not long after his
graduation, they started a family. Bette became the proud mother of daughter
Susan in 1963, followed by son Richard in 1966. In 1967, the adventure really
began as Bette and Bill left warm, familiar California for snowy and foreign Acton,
Massachusetts. It was there in 1969 that daughter Carolyn was born, and the
family was complete.

Bette was a true product of her 1950s’ upbringing, and she held the roles of both
wife and mother as essential to the success and happiness of the family. She
performed both masterfully, creating a warm and well-tended home where
everyone was welcomed and cared for. Supportive and loving, but also bright and
strong, Bette worked tirelessly with little fanfare, all the while guiding others
toward their own success.

As the kids grew and moved on, Bette returned to her true passion – travel. She
had the great fortune of being able to travel with Bill all over the world. There
were both business and pleasure trips to Japan, Hong Kong and Europe, including
a day trip into the Soviet Union. They enjoyed an Audubon cruise in Alaska and
several river cruises in Europe. Bette even went on a safari in Kenya and Tanzania,
one of her favorite adventures. To Bette, if you couldn’t travel yourself, the next
best thing was planning trips for others. What first began as helping friends with
their arrangements, soon led Bette to working at and, ultimately, owning a travel
agency.

If anything, Bette embraced being a grandmother with even more joy and honor
than she did a mother. Having purchased a vacation home on the Cape in 1980,
Bette and Bill moved into retirement on Cape Cod in 1998, when they still had
only 3 very young grandchildren. By then, they had a wonderful home in
Willowbend, where she and Bill could golf, go to the beach and entertain their
growing family and all their grandchildren. The house was built for them with a
fun basement full of games and toys (just like their Acton home) and a bunk room
where “Gammies” would make sure all her grandchildren were warm, tucked in
and well-fed. Bette and Bill relished retirement, as they got to spend many
summers and holidays with their nine grandchildren and two step-grandchildren.
Watching them grow through childhood and on into high school, college and
beyond was pure joy to them. Generous to a fault, Bette’s family was her
greatest pride, one which she always made sure was cared for and had whatever
support was needed. She will be remembered as being competitive, sharp and
strong-willed, as well as incredibly kind and generous.

Bette is pre-deceased by Bill, her wonderful husband of almost 60 years, her
sisters, Jane (Benidt) Gleason and Gail (Benidt) Goldman, her beloved sister-in-law
Karen (Hanson) Patty, and many cherished friends. She is survived by her children:
Susan (Simon) Wall of Mansfield, MA, Richard (Laura Wedemeyer) of Hopkinton,
MA, and Carolyn (Bradley) Zolla of Loveland, OH, her grandchildren: Anna, Karina
and Celia Craft, Zachary, Kira and Cyrus Hanson, Abby, Pippa and Winnie Zolla,
and Charlotte and Emily Wall, and her 4-year old great-granddaughter Bradleigh,
as well as her sister Judy, brother Jim, dear cousins, nieces and nephews, and
many friends who feel like family.

A service and celebration of both Bette and Bill’s lives will be held at New
Seabury Country Club on Cape Cod (Mashpee, MA) at 3:00 pm on October 22.
Though Bette would request no contributions, please feel free to contribute to
the Alzheimer’s Association, Doctors Without Borders, the ASPCA or a charity of
your choice..