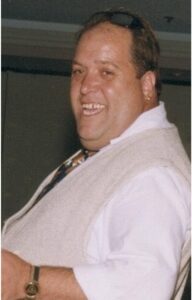 Brian R. Ferreira, known to friends as “Fish” passed away on June 11, 2019 at St. Elizabeth’s Hospital in Boston after a brief illness at the age of 54.

Brian was born in Taunton, MA on October 26, 1964. He attended Taunton schools and was a life-long resident.

He will be remembered most by how he loved and cared for his mother. He was also very passionate about his animals which he considered his children. Brian was most comfortable wearing shorts and sandals no matter what time of year it was and I think most that new him will miss his ability to make you laugh no matter what your mood.

Brian was preceded in death by his father, Richard (Smitty) Ferreira. He is survived by his mother Annette (Foubert) Ferreira, sisters Debra (Ferreira) Beaulieu and Linda (Ferreira) Kauranen, brother Richard Ferreira, as well as an aunt and uncle, several cousins, nieces, nephews and many friends especially his lifelong friend Michelle (Conrad) Lovelidge.

A graveside memorial service will be held at St. Joseph’s Cemetery in Taunton (St. Ann section, last entrance in back on East Britannia Street) at 10:00 A.M. on Saturday, September 14, 2019.

In lieu of flowers we ask that you make a donation in Brian’s name to the Taunton Animal Shelter. A memorial bench is being donated to the Shelter in his name.