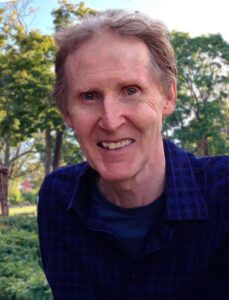 If Brian had been born into the plant kingdom, he would have been a tree. In fact, as a boy whenever
anyone would ask,“Where’s Brian,” his mother would say, “Look at the top of the tallest tree.” Brian’s
strong bond with trees continued into adulthood. In the early seventies, he and his wife Carolyn built
and lived part-time in a two-story tree house along the Genesee River in Western New York State on the
farm of James and Virginia Russell, his parents.

From his beginnings in Buffalo, New York, Brian’s innate childlike innocence, kindness, and curiosity
never left him. He is descended from Tolkien’s Ents while embodying the tripping-the-light-fantastic
spirit of Tom Bombadil. Brian had his own style. For example, most of his adult life he designed and
wore a series of leather pouches on his hip, long before men did such things.

He loved solving puzzles of all kinds, which led him— even while pursuing his B.A. in math from the
University of Buffalo—into scientific programming. In 1964, Brian worked as a computer consultant on
the Lunar Excursion Module (LEM) component of NASA’s first manned moon mission. Next for IBM, he
devised a way to store more data on a smaller chip. In the late sixties, he moved to St. Mark’s Place in
New York’s East Village and rode his unicycle to Rockefeller Center each day where he worked as a lead
programmer on NBC’s election forecasting system. Moving to Cambridge, Massachusetts, he joined a
team of programmers refining the Loran-C navigation system; and he started a few monthly computer
users’ groups—first for FoxPro in his home and later for C# that met at Microsoft.

When he was 64, Brian entered graduate school. In 2011, he received an M.A. in the teaching of
mathematics from Harvard University, graduating second in his class. He wrote his thesis on three new
functions he devised and termed “Extralogarithmics.” Afterwards, he tutored privately, taught
mathematics at local colleges, and helped staff Harvard’s math question center.

Sadly, Parkinson’s and Lewy Body dementia cut short his math teaching career, and after a long decline,
he died peacefully on July 31, 2021 in his home on Arlington Street in Cambridge, surrounded by his wife
and friends.

In lieu of flowers, donations may be made in memory of Brian to The American Parkinson’s Disease
Association or to The Nature Conservancy. A memorial service is planned for later this year or next year.