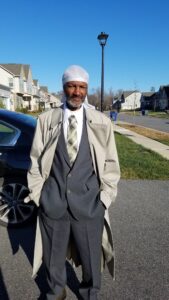 Calvin was born in Montgomery County, Maryland to parents, Luther and Sarah Martin on August 1, 1956. He grew up with 5 siblings: Luther Jr., Rose, James, Ivy, and Michael. In his youth, he enjoyed riding and “breaking” horses, racing, fishing and spending time with his family. In 1980, at just 24 years old, Calvin packed up and relocated to Boston, MA. He began his career as a Diesel mechanic and was extremely proud of his knowledge of diesel engines and would often boast of his ability to fix “planes, trains, and automobiles”. He worked at Dodge Motors as well as other reputable shops over the years as a mechanic.

In March of 2019, Calvin Martin was diagnosed with stage 3 Prostate cancer. On Friday, September 25, 2020 Calvin Martin and May Warthaw got married after 30 years in the presence of all 4 of their children and his 2 closest friends. The following weekend Calvin called all his loved ones together at 6 am to spend the whole day together. Calvin spent his last days surrounded by family and friends; listening to the voices of his loved ones and his favorite music. On the early morning of November 6, 2020, Calvin Martin passed peacefully in his sleep.

Calvin Martin was preceded in death by his parents: Luther Sr. and Sarah Martin, his older brothers: Luther Jr and James (Jimmy) and his older sister, Rose. He is survived by his sister Ivy Martin and his brother Michael as well as his many beloved nieces and nephews. Calvin leaves behind a legacy of his 4 children: Dustin, Adrienne, Monica and Calvin II, his 5 grandchildren: Dustin II, Jayden, Joziah, Izaiah and Yahzhua, and his woman of 30 years and newlywed widow, May Warthaw.