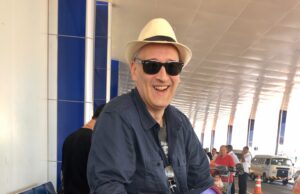 Carlo was born in Montevideo, Uruguay, South America and moved to the United States in 1983. He spent over 30 years working in the Bricklayers & Allied Craftsmen Union Local 3 as a Tile Setter. He was known for being a passionate, hardworking, and dedicated man. Friends and family used his skill in the trade to remodel their homes as well. When he was not working, he was usually found talking about cars, drinking wine, or grilling. He was always the one cooking at all the family gatherings. Everyone knew he was the grill master and could host the best barbeque. Carlo got along with everyone as he spoke 4 languages. Carlo was a great father to his daughters, Melissa, and Carolina. He played the biggest role in their lives when their mother passed away in 2007. As a single father, Carlo raised his two girls to be strong, independent women. He shared special moments with his daughters including teaching them to drive, watching them graduate, and becoming a Buelo to his granddaughter, Aliana. He was deeply loved by his wife, Iracema. They met in 2010 and got married on April 2, 2011. They enjoyed traveling and shared a dream of one day moving into their home that they built together in Brazil, after retirement. Carlo was surrounded by many people who loved and cared about him immensely. If he wasn’t spending time with his wife, daughters, or friends, he would be found cuddling his dog, Dora. Carlo loved all animals but was most passionate about his dogs. He would often call his dog his other “daughter.”

When Carlo first found out about his cancer, he took the news gracefully and without fear. Even during his two years with cancer, Carlo pushed through the bad days with grace. He never seemed scared of his diagnosis or feared death. After his oldest daughter got engaged, he congratulated her and said jokingly, “Ryan came over and asked my permission. I think he thinks I’m going to die or something.” Death was never on his mind. He used his sense of humor and sarcasm to get through these last two years. He celebrated on his good days and took it easy on the others. But, regardless of how his days went, he always answered the phone and told everyone he was feeling good. He was a strong, hardworking, funny, and courageous man. He will be deeply missed by all who knew him.

A small family memorial service will be held at a later time.