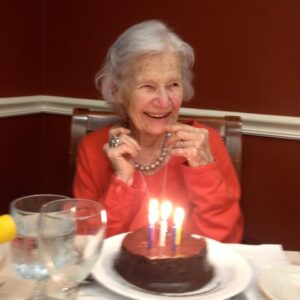 Carolyn Bryan Kirkpatrick, 96, died in peace as the super moon rose on November 13, 2016, in Newton, Massachusetts. She loved every minute of life and was she always interested and curious about everyone and everything that was happening around her. Throughout her last year she was surrounded and cared for by her family and the loving caregivers at both the Falls at Cordingly Dam Assisted Living and Compassionate Care Hospice.

Carol had a twinkle in her eyes and smile, an endearing warmth and kindness for those who crossed her path, and a love for adventure and mischief. She cared deeply about her family, friends, and all those acquainted, and was always willing to offer sound problem-solving wisdom. She gave of herself in various volunteer capacities including counseling work with Planned Parenthood, and years spent on the Board of the Reading Public Museum (Pennsylvania) where she turned her passion for old movies into a yearly Classical Film series.

Born in Philadelphia, Pennsylvania on November 11, 1920 to Caroline Guild Bryan and Mahlon Philip Bryan, she was raised in Abington and Williamsport, Pennsylvania, and Great Neck, Long Island, and even home-schooled for a year at Happy Camp, a gold mine along the Klamath River in northern California. She graduated from Wheaton College in Massachusetts and later earned a Masters in Education from Kutztown University of Pennsylvania.

She loved summers spent as a camper at Camp Oneka in Tafton, Pennsylvania, and as a counselor at Camp Wyonegonic in Denmark, Maine. Through a special camp friendship she met her love, Bill Kirkpatrick. Teenage sweethearts, they married before he served as a pilot in the Army Air Corps overseas during World War II. When the war ended they moved to New Haven, Connecticut while Bill studied architecture at Yale and she worked at the Gesell Institute for Child Development. Returning to Pennsylvania they raised their family in Wyomissing, where they lived for 53 years before retiring to Duxbury, Massachusetts. Their early adventures were filled with canoeing, camping and hiking in New Hampshire and Maine. In later years they loved exploring the New England and Mid Atlantic coasts from their sailboat, Elle.

She will be honored in a family service to be held at a later date. Memorial donations are gratefully appreciated and may be made to the United Mitochondrial Disease Foundation, 8086 Saltsburg Road, Suite 201, Pittsburgh, PA 15239 or via http://www.umdf.org.