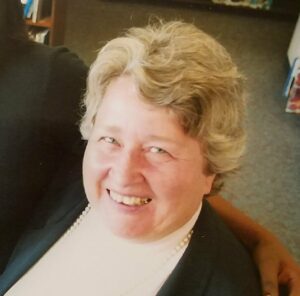 Catharina J. Stassen-Eussen of Cambridge, MA, passed away on January 15th, 2021, at the age of 78 after valiant fight against colon cancer. Born in Voerendaal, the Netherlands on April 20 th , 1942, Catharina (or Toos as she was known to friends) was a North Star for all she met. She was a driven student who joined Eussifruit, her family’s fruit wholesale business, right after high school. She met her husband when he was her waiter at a dance club. They were married in 1966. In 1971, with two young children in tow, they emigrated to the United States landing at JFK airport. After her three daughters were in school, she returned to her education obtaining a Bachelor’s Degree and Two Masters Degrees in 3 years in the Penn State Honors program. She spent her early career in business logistics and operations research.

After leaving the workforce, Catharina pursued her passion for helping others in education by volunteering her time at Boston Community Leadership Academy (BCLA) and The Boston International Newcomers Academy (BINCA). She deeply believed that education is the tool that levels the playing field and that every student has the capacity to succeed. She took a program that whose mission was to help students pass a state graduation exam and expanded it into a diverse and robust tutoring program that served over 1000 students over 18 years. Tony King, principal of BINCA, “Sometimes the students would try to give up on themselves, but Catharina would not let them. Dozens of students are living a better life today because she refused to give up on them.” Wherever she went Catharina was lively and loved by the students and faculty alike. She always had a smile and love written across her forehead. She never complained. While traveling through Logan airport on their trip to the Galapagos Islands, she and her husband heard someone calling “Miss, Miss…” It turned out to be one of her former students who was now working for an airline. He could not express how grateful he was for her support when he was a student.

Her favorite times were gatherings of family, especially with her grandchildren at their home in the Catskills. She dearly loved and was proud of all of her grandchildren. She loved communicating with them and used texting and social media. Swimming was her lifelong activity and the grandkids have lots of memories of swimming with Oma from babyhood thru this past summer. Her email signature contained a quote “Respect nature, respect science and respect each other.” These were principles she lived by. Her death leaves a hole in the heart of many and we were all better for her presence.

She is survived by her husband, Frans Stassen; her sister Bertie Lamberiks, brother-in-law Piet Lamberiks, niece Erline and nephew Gideon Lamberiks in the Netherlands; her daughter, Veronique Bartman, grandsons John and James Bartman of Dublin, OH; her daughter Nicole Stassen-Wagner, son-in law, Aaron Wagner, and her grandchildren Nathan, Noah and Hannah Wagner, of Rochester, NY; dozens of nieces and nephews, and countless friends and family members around the world. Private Services will be scheduled by the family for Catharina at a later time when current pandemic-related travel restrictions are lifted and it is safer for people to gather again to celebrate her life.

In lieu of flowers, donations may be made in Catharina’s memory to the Boston International Newcomers Academy, a school near and dear to Catharina’s heart. (https://www.bincabps.org)