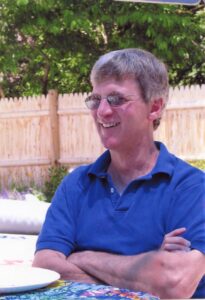 Charles J. Garrett, Jr., 64, a resident of Marblehead, Massachusetts, died on March 8, 2021. He passed
peacefully at home after a long period of progressively declining health. His quiet disposition endured
despite advancing cognitive and physical challenges over several years. His kindness and smile are
greatly missed.

Chuck, as he was called, was born in Montclair, New Jersey, and raised in Bloomfield, New Jersey,
before moving to Sussex, New Jersey midway through high school. A graduate of High Point Regional
High School, he was a National Honor Society member, varsity soccer team captain, and school musical
cast member.

Chuck was first in his family to attend college, attending the University of New Hampshire, majoring in
engineering, as a freshman. His savings depleted, Chuck then attended New Jersey Institute of
Technology, combining grants with work on weekends, vacations, and summers to pay its costs,
graduating with a Bachelor of Science in Industrial Engineering degree. Months before graduation, Chuck
launched his professional career, accepting an offer that influenced the rest of his life – a position with
General Electric Company’s (GE) two-year manufacturing management program – and began
immediately after graduation.

When GE relocated his department to Ohio, Chuck opted to remain in Massachusetts, where he had
purchased his first house after just a couple years working in Lynn. By then, he had established deep and
lifelong friendships with coworkers through softball, soccer, volleyball, skiing, and other activities. It is an
understatement to describe them only as friends; they became his extended family.

Chuck soon began working for B-C-D Metal Products, Inc., Malden, Massachusetts, and proudly served
as its Vice President of Operations for more than 22 years before his declining health contributed to his
departure. Chuck then dedicated his work efforts as Purchasing Manager, Essex Engineering, Inc., Lynn,
Massachusetts, for 15 months before his progressing illness again led to his departure. Work was integral
for Chuck; he continued to work part-time at Home Depot until forced to retire due to his health.

Beyond work, Chuck loved coaching youth sports, including baseball and soccer. He coached
Marblehead Youth Soccer teams, from under-10 through under-16 age groups, fall and spring seasons,
even coaching more than one team per season sometimes. He served as an assistant coach for
Massachusetts Youth Soccer’s District Select Program for several summers as well. In addition, he led
multiple Marblehead Youth Baseball spring teams as manager and assistant manager.

A Marblehead resident for 23 years, Chuck encouraged his wife, Karen, in her pursuits as attorney and
educator, and everything else that interested her. Chuck was most proud to be the father of his sons,
Jack and Tom, as they are called.

Chuck relaxed by playing golf and volleyball, watching sports on television, solving Sudoku puzzles,
attending concerts with Karen, and spending time with friends and family. Wednesday nights were
reserved for volleyball followed by pizza with friends – except when he ran soccer practice instead. A
passionate New York Mets and New York Football Giants fan, Chuck rarely missed watching their games.

In addition to his wife Karen, with whom he shared almost 27 years, and their sons, John and Thomas, Chuck is survived by his parents, Mary Jane Garrett, Charles Garrett (Marguerite), his brother, Scott Garrett, brothers-in-law, Scott Sederstrom (Elizabeth) and Jon Sederstrom (Dorrit), and their children, and
his late father-in-law’s partner, Barbara Kautz. In addition, he leaves many aunts, uncles, cousins,
extended family, and friends.

Chuck was predeceased by his sister, Diane Garrett, mother-in-law and father-in-law, Ann and Richard
Sederstrom, and brother-in-law, Mark Sederstrom.

No services will be held. Burial will be private at the convenience of the family at a later date.

For purposes of establishing a named scholarship in Chuck’s memory in Marblehead, his family has
requested that in lieu of flowers expressions of sympathy may be made:

If making a donation by check, please make the check payable to Marblehead Youth Soccer Association,
and include a note with the designation: Charles J. Garrett, Jr. Memorial Scholarship Fund.

Chuck’s commitment, dedication, and perseverance will be perpetuated through the creation of this
scholarship and honored through its ensuing award to former Marblehead Youth Soccer Association
players as graduating seniors, with at least a 3.0 grade point average, pursuing studies at four-year
colleges or universities in the fields of math, science, or engineering.

Chuck’s family, Karen, Jack, and Tom, appreciates and thanks everyone whose generosity helps to
create this scholarship.

His family also thanks Massachusetts General Hospital’s Dr. Bradford Dickerson, Director,
Frontotemporal Disorders Unit, and Dr. Amy Newhouse for their roles in identifying Chuck’s condition. In
addition, his family extends warm thanks to his Care Dimensions’ nurses and home health aides for their
compassionate care over the last four months.

Arrangements are under the care of Boston Cremation, 287 Main Street, Malden, Massachusetts 02148.