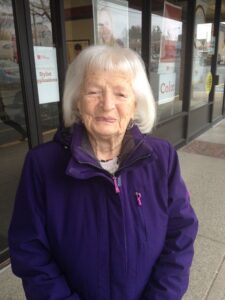 A life that spanned more than a century has ended. Chiara Marina (DelRossi) White passed peacefully at home earlier this month, surrounded by family and the music she loved. She was a well-spring of joy to all who knew her.

Born in 1917, at the family homestead on Water Street in Wakefield, MA, Chiara was one of five children born of Italian immigrants, Fabio and Lucia (Diodati) DelRossi, both originally from Abruzzi. She loved her years in Wakefield, where she spent nearly every summer day canoeing and swimming with her friends, her beloved sister Lillian (Mickey) Walker, and their many cousins on Lake Quannapowitt. She loved nature, watching the birds, smelling the roses, and pointing out the magical pictures she found in cloud formations.

With the onset of the depression, Chiara began her work life, first as a nanny-companion, then as a clerk at WT Grant & Co. on Main Street, Wakefield. As a stay-at-home-mom in the early 1940s, Chiara volunteered for the American Red Cross, presided over the East School PTA, and was Brownie Leader and a Den Mother. In 1953 she reentered the workforce at Whittemore’s Greenhouses “around the corner” and was always home when her children returned from school. Among her favorite jobs was waitressing at Howard Johnson’s Restaurant in Stoneham, where she quickly became a favorite of customers and coworkers. She ended her formal employment as a bookkeeper at Wakefield Bearing Corp, when she retired at age 62.

Chiara married James White in 1939 and together they had three exceptionally handsome and brilliant children, Judith Hughes, James White and Lucia Udlinek. Early on in her 47 year marriage to Jim, which ended with his death in 1986, Chiara and Jim moved to Stoneham. With the help of close friends in the building trade and his brother-in-law Adam Walker, Jim built the home that he and Chiara lived in until their respective deaths.

Chiara devoted her life to friends and family. She became a primary caregiver for each of her and Jim’s parents as they became infirm due to age. She welcomed everyone she met into her home – for laughter when shared, for food when hungry, and for solace when depressed. She never met a stranger, and she loved the unlovable.

Chiara has been a role model for a healthy and energetic retirement. After leaving Wakefield Bearing, Chiara decided to fulfill all of the lifelong dreams that had been sidelined due to work and family obligations. She taught herself to ride a bicycle and “pedaled her ass around the Town of Stoneham” (as Jim liked to describe it). She took evening classes and became fluent in Italian. She learned to play the mandolin and became proficient enough to join a band (The Silver Bells) and go on the road to paying gigs across eastern Massachusetts. She learned to read Tarot Cards and gave readings just for fun. She played bridge and a mean game of poker at the Stoneham Senior Center. She became a certified Yoga Instructor age 66, and she conducted weekly senior exercise programs. She enjoyed recognition as “Massachusetts Senior Citizen of the Year” for her selfless dedication to the well-being of others in the community and “Stoneham’s Local Treasure.” But the absolute love of her life was music and dancing.

Chiara started line dancing as a student at the weekly classes at the Stoneham Senior Center. She loved the opportunity to have fun while maintaining fitness. She eventually became a line dance instructor herself and progressed to the Presidency of the International Line Dancing Teachers Association. At the height of her career, she gave weekly line dancing classes to seniors in Stoneham, Wakefield, Melrose, Reading, No. Reading, Somerville, Medford, Saugus and Everett. She selected the music and choreographed the steps for entertaining and energetic programs. Chiara also led the Shoetown Strutters, a line-dance ensemble which performed at special events in local communities and at the Massachusetts State House. She retired from her dance instructing career at age 95. Her students loved her and have continued dancing under the expert tutelage Chiara’s protégé Charlotte Luscombe. You can find them at the Medford Senior Center on Tuesday mornings at 10:00 a.m.

Just never forget to be dexterous and deft.

And never mix up your right foot with your left.

And will you succeed?

Yes! You will, indeed!

Chiara is survived by her son, James F. White of Stoneham, her daughters, Judith Hughes (Ken) of Bremerton, WA and Lucia Udlinek (Ken) of Yakima, WA, two grandchildren, Christina King-Talley of Emmonak, AK, and Derek Conant of Stoneham, MA, and a step-granddaughter, Amanda Kreitzberg of Oregon City, OR. She was predeceased by her beloved grandson, Andrew Owen Katsirubas. She is also survived by five great-grandchildren, and four great-great-grandchildren.

As she started to decline, Chiara received services from Mystic Valley Elder Services, HomeInstead Senior Care, Able Home Care and Associated Home Care. The loving attention of her caregivers from these agencies allowed her to remain in her own home until the end. CareDimensions hospice attended her during her final week on this earth. Her family can never fully express its appreciation to each and every person who helped ease her final days. Truly, you were her “gift from God.”

In accordance with her wishes, Boston Cremation handled the disposition of Chiara’s remains. A tribute page has been uploaded to https://www.bostoncremation.org/obituary

A memorial and dance celebration will take place at the Medford Senior Center, 101 Riverside Ave., Medford, on March 10, 2018, from 2-5 p.m. Please come and join us in commemorating Chiara’s remarkable life.

In lieu of flowers, donations can be made in her name to the charity of your choice or to Mystic Valley Elder Services, 300 Commercial St., #19, Malden, MA 02148, which provided care and comfort to her in the last years of her life.

You Are My Sunshine

Angels in Heaven, Know I Love You