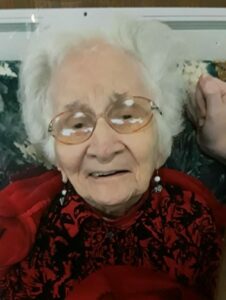 Christina Mary (Bruno) Salachi, 97, of Norton and formerly of Mansfield, passed away peacefully on February 23 with her family at her side. She was the wife of the late Alexander W. Salachi, who passed away in 1977.

She is survived by her devoted son Alexander W. Salachi, Jr. and his wife, Elaine of Mansfield along with her cherished grandchildren, Emma and Adam. She also leaves her loving brother, William S. Bruno and his wife Ann Marie of Mattapoisett and her sister in-law Joan Bruno of Norton. Christina was preceded in death by her dear parents, Salvatore and Orsola (Cutillo) Bruno of Mansfield, her siblings, Madeline Galvani, Francis Bruno, Carmella Bruno, Clara McClellan, and Anthony Bruno, her brother in-law Albert Salachi, her sister in-law Eva (Salachi) Keough, her niece Vivian (Salachi) Ruth, and her nephew Kevin McClellan. She also leaves behind many beloved nieces, nephews, grand-nieces, grand-nephews, and cousins.

Christina was born and raised in Mansfield and was a 1939 graduate of Mansfield High School, where she was Class Treasurer. After high school and before marriage, she worked at Sannie’s and the Bleachery. After years as a homemaker, she resumed her career and was a teller at the Mansfield Credit Union and later retired in 1978 as Assistant Treasurer of the Mansfield Co-Operative Bank. She later worked for years as the bookkeeper at St. Mary’s Parish in Mansfield. She was an active parishioner at St. Mary’s and also a member of the Catholic Women’s Club. In 2010, Christina moved to the Daggett Crandall Newcomb Home in Norton, where she received outstanding and loving care for the remaining years of her life.

Christina’s greatest joys were her faith, her family, and her friends, and her happiest moments were spent in the kitchen and at the dining room table, especially on Sundays and holidays, surrounded by her extended loving family on both the Bruno and Salachi sides.

Friends and relatives are invited to attend her funeral Mass to be held at St. Mary’s Church, 330 Pratt St. in Mansfield, on Friday, March 1, at 11:00AM. Visiting hours are from 4-8 PM on Thursday, February 28, at Boston Cremation, 115 North Main St., Mansfield.