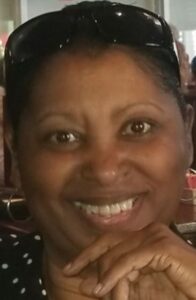 Cynthia Kyles – A long-time resident of South Carolina, passed away at the age of 61 on Thursday,
October 28, 2021. Born to the late Johnny Ray Kyles of Alabama and Mary Francis Hall-Kyles of
Campobello, South Carolina who met in New York City in the late 1950’s.

Her parents moved to Boston, Massachusetts in the late 1960’s which is where Cynthia lived until the
age of 30 when she moved to her mother’s home state of South Carolina. She graduated from the
Farragut Middle School, Brighton High School: Class of ’78 and the Boston Business School: Class of
1980.

She was most proud of giving birth to her beautiful daughter Shona who she shared with her special love
of nearly 10 years, Ronald James Jackson. Her career in Boston included Bank of Boston (today, Bank of
America), where she began as a Teller, then Bank Supervisor, then worked as Bank Manager at both the
Jamaica Plain and Brookline Avenue Branches, and also worked for CVS Pharmacy. In South Carolina,
she worked at Shell Gas Station in Spartanburg, Mack Molding Plant in Inman, BB&T Bank, Spartanburg,
Kays Jewelers &amp; Casual Corner at the Westgate Mall, and the Inman Mills Plant in Inman, SC.
An event that changed her life forever was a stroke she suffered in 2017 which left her with numerous
health challenges. Cynthia loved music and her favorite artists included Club Nuveau, the Jackson 5,
Aretha Franklin, BB King, and Barry White. Her favorite food was Chinese and she enjoyed indulging in
everything chocolate, ice cream, popcorn, Pepsi and Coffee. Before she became ill from the stroke,
Cynthia was the consummate fashionista! She was a stylish dresser and was known for her favorite
colors – black &white.

Her hobbies included going to the movies or watching them on television, shopping, taking long rides
with family and since her childhood, she was a collector of dolls, and she loved collecting beautiful
china. Cynthia had a soft quiet spirit and she loved spending time with her family – especially doting
over her grandchildren. She also enjoyed cuddling up to a good Stephen King novel, Women’s Day and
Vogue Magazines.

She is predeceased by both parents, a younger brother Eric Swayne Hall, grandparents Judson Hall of
Campobello, SC and the late Cora Lou Horne-Hall of Georgia.