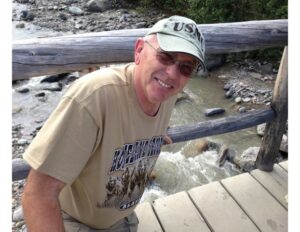 “Semper Fi.” Not only the motto of the US Marine Corps in which David served but also a nexus of his
life. Having David around was like having a quiet archangel nearby. He was a calm, unassuming and
steady presence that could quickly rise up to take on any threats or challenges in support of people and
things important to him.

A quiet and unimposing man, his family, friends and community all benefited from his fierce dedication
and loyalty. After attending Marist College in Poughkeepsie NY for 3 years, David began what he called
his “Foreign Studies Program” by joining the US Marine Corps and serving with honor in Viet Nam.
Upon his return he enrolled in the challenging General Electric Apprentice Program and after graduation
was employed by GE in Schenectady and later Momentive Performance Materials in Waterford, NY.
Not one to easily commit, once he joined a group, his participation made a difference. He served
selflessly in the community of Charlton NY as a Town Constable and he was proud of being a 44-year
member of the Charlton Volunteer Fire Department where he rose from basic fighter to the rank of Chief
and then he continued as District Commissioner for 17 Years.

His Celtic heritage was ever noticed in his Scottish steadfast character and his quiet Irish humor. A
member of the St Andrews Society he was known to wear the Gordon Clan Kilt with a Shamrock
embossed tie. A man with a generous and loving heart, David would go to any lengths to make certain
the people most important to him were always safe and happy. If ever someone needed help, they knew
they could call on Dave and he would answer. His contributions to holidays were always special. From
Founders Day Parades to Easter Egg Hunts to the 4 th of July and more; he celebrated in style! He will be
remembered for giving hundreds of boat rides and building glorious campfires at the Great Sacandaga
Lake that he loved so much. He could outlast the most diehard among us and still have energy to burn
when it came to what he was passionate about. Few could match his planning for an adventure trip to
Disney World, rafting the Grand Canyon or visiting a foreign country, he made sure everyone had a trip
worth remembering. He was a grown-up who never grew old and at Christmas time there was no bigger
Elf! Not limited to holidays, Dave showed his love by on ordinary days as well; being certain to attend a
sports event, theater act or recital, providing a ride, giving purple mittens for chilly little hands, making
his famous Mac and Cheese, buying ice cream treats for everyone. Whatever was important to those he
loved, was important to him. His family and close friends were blessed to be allowed to see the inner-
circle smile and more hidden side of David; the one that would do anything to keep them safe and make
them happy.

His golf game was another story! His was definitely a love/ hate relationship with all the classic
trappings. Although he wished himself to be a better player, he generally experienced a typical “good
walk gone bad” type of game but he always thoroughly enjoyed the friendship and the company of his
fellow players and especially looked forward to their game review at the “19 th hole.”
After retirement, David fully embraced the life of a “Snowbird” dividing time between sweet summers in
NY at the lake and warmer winters in Pawleys Island, South Carolina where he was able to enjoy a busy
schedule of activities. When not beach walking, bike riding or playing golf with dear friends from
Canada, Indianapolis, Michigan and NY, he volunteered at Brookgreen Gardens where he worked in
Horticulture, the Zoo, the Labyrinth, Special Events and he was a member of the President’s Counsel. He
also very much enjoyed camaraderie and river paddling as a member of Dragon Boats At The Beach, an
energetic and engaging club supporting cancer survivors and their caregivers.
David was married to, and was the absolute greatest supporter of, his wife, Kathy, for almost 48 years.
Together they raised two sons Adam and Brian who were the most important people in his life. He was
so very proud of his sons and, although his love was deeper and more profound than mere words can
express, it only grew as Dave became a Father-in-law (Jennifer and Lindsay) and then a Grandfather
(Callighan, Rowan, Sophia and Dylan).

There will be no pomp and circumstance, flags flown at half-mast or speeches from politicians for this
good man but often the strongest and the best is the person who steadily supports others to achieve all
they can. David Alexander Milne had that strength. He lived a full and complete life dedicated to those
he loved and the values he held true. May he now rest in peace with the knowledge that he was loved and
that his absence will be felt by many.

David is predeceased by his son Adam Milne who passed from Leukemia in 2001. Dave is survived by
his wife Kathleen (Moffett) Milne, his son Brian (Lindsay) Milne, his daughters-in-law Jennifer
(Benjamin) Turner, brothers Mark and Chris (Kitty) Milne and sister Anne (Michael) Shannon, many
close and loving cousins and very, very special nieces, nephews and godchildren. A Celebration of Life
will take place at a later time when we can safely gather together in loving tribute to remember him. Any
donations can be made to the Leukemia and Lymphoma Society because, although now gone from our
sight, David continues to support those who need his help.