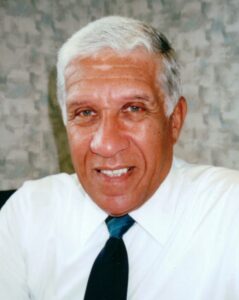 David Donald Underwood passed away on Friday, May 28, 2021, at the age of 90. After an unexpected decline
in his health, David died peacefully at the Newton Wellesley Center for Alzheimer’s Care, with his devoted
daughter and caretaker Melissa, by his side.

David was born in Boston, MA on March 31, 1931, to parents Charles Wheeler Underwood and Marion (Ball)
Underwood. Nestled in the middle of 11 brothers and sisters, along with two cousins as close as siblings, his
commitment to and love of family would prove to be his greatest legacy.

Following his graduation from Boston English High School, David served in the Merchant Marines and Army,
traveling to every continent in the world except Antarctica.

He returned home and soon met his beloved wife of 61 years, Dorothy (Bruce) Underwood. A man of integrity,
gentle strength, and boundless love, how perfect he was, with Dorothy always by his side, in raising their three
daughters, Michelle, Jennifer, and Melissa.

In 1960, David and Dorothy bought their first home in Randolph, MA where they would raise their family.
Soon after moving, David began a 20-year career with American Biltrite in Cambridge, MA rising through the
ranks from line worker to chief foreman. In the mid-1980s a career change brought him to Dorchester District
Court, where he worked another 20 years, retiring as Assistant Clerk Magistrate.

David and Dorothy began vacationing on Martha’s Vineyard in the early 1960’s and their dream to purchase a
vacation home soon became a reality with a fixer-upper in Oak Bluffs. David’s favorite pastime on the island
was to walk to the Inkwell each morning, sit on the bench that his daughters had dedicated to their parents, and
chat friends, old and new. David and Dorothy made the Vineyard their permanent residence in 2000, perfectly
timed to enjoy more quality time with their grandchildren.

Known affectionately as “Papa”, nothing made him happier than to spend time with his 2 granddaughters and 3
grandsons. In 2020, he became a great grandfather bringing a new joy and brightness to his life during
otherwise challenging times.

Due to the pandemic, and out of an abundance of caution for all extended family and friends, the family will
plan a private memorial.

Please smile when you think of David. David was a storyteller, he loved to share memories of his family and
friends, and we all loved to listen to them. People wishing to honor David’s lifelong commitment to kindness
and family values can be inspired to keep telling stories. It is our stories that connect us and unite us and will
forever keep David in our hearts.