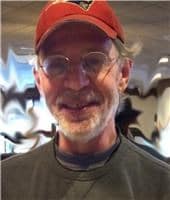 A Mansfield resident all his life, David John Lemieux, age 64, passed away peacefully at his home. Born in Mansfield on February 8, 1957, he was the son of the late Henry A. and Geraldine Lemieux. He was a graduate of Mansfield High School and began his work life at Betty & Bill’s Toy Shop. He attended Stonehill College, where he earned a degree in English Literature. Later he trained in advanced supply chain and logistics and worked for many years for Toyota Parts Distribution in Mansfield and had subsequent postings in Cincinnati and Newark. Later he returned to Mansfield and attended Harvard, where he studied classical literature and creative writing.

While quiet and unassuming in appearance, he was a secret daredevil. There was a wealth to his courage, intellect, and perspective but it was so often kept under wraps. He enjoyed the many hiking and bike trails in southern New England and in other parts of the country, including Yosemite National Park, where he climbed El Capitan to watch the sunset. In winter, he cross country skied all over New England.

Short stories, poetry, and essays demonstrated his agility with the written word.

He was the kindly and cheerful uncle at holidays and birthdays, and was best friend to everyone in the family. Perhaps his most appreciated title was that of “Master of Fried Fish,” for his secret and tasty recipe.

He will be missed by his two sisters; Margo Lemieux and Suzanne Lemieux Wilson; a brother Paul Lemieux and his wife Debbra Price; and several nieces and nephews and their families.

A Celebration of David’s life will be held at a future date.