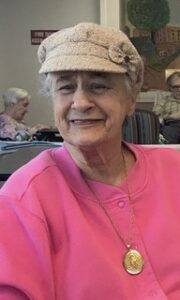 Denise “DEE” Marie Tremblay, age 78, born December 8, 1941, died today from complications of a virus at Beverly Hospital. Dee spent her younger years living in Peabody, MA with her mother, sister and grandparents. Dee married young to Richard O’Donnell, Sr, and became a
mother to Michael Patrick and Richard Patrick. She loved being a mother, and her strength as a woman was evident when she found herself alone unexpectedly with two young children. She had the strength to take care of her boys and be an outstanding and loving mother. She met her good friend Carl MacKay in 1964 while living in Salem, MA, and their friendship eventually grew into love. She then married Carl MacKay and subsequently had her third child, and only daughter, Carleen Marie in 1965, creating a blended family. Several years later, the family became devout Jehovah’s Witnesses and Dee continued to carry her faith with her throughout her life. Finding herself single in 1984, she called upon her inner strength to go back to school and get her GED. She then completed a property management program with the assistance of a women in transition education group. Dee then went on to work in property management in Boston and Beverly, MA for many years. She carried those administrative skills with her throughout her working career, successfully working in the healthcare field doing medical billing until she became disabled.

She chose to move to Anniston, Alabama to be close to her only sister Paulette “RED” Tremblay. The two women lived close together, both setting roots remotely on the top of Cheaha Mountain in Alabama. While living in Alabama, Dee continued her love of supporting women by assisting the elderly, fostering other women in transition and ultimately introducing her son Richard Patrick to his future wife Deborah. Alabama held a special place in Dee’s heart, she loved working in her garden, enjoying the outdoors and decorating her home with knick-knacks. The heart strings pulled from her childhood home of Massachusetts however when her only daughter Carleen Marie was going to give birth to a grandchild. One of Dee’s absolute most precious memories was being able to be at the birth of her granddaughter Kayla Marie, ever changing her life. Hoping to support her family, Dee decided to stay in Massachusetts to be close to her grandchildren.

Many years later, her heart strings were pulled again to return to her rustic mountain home in Alabama. By purchasing a piece of land on Mt. Cheaha and creating a home there, it helped to solidify her independence. Shortly thereafter her middle son Richard Patrick, needing a change in his life and wanting to provide support for his mother, he decided to join her in Alabama. Richard Patrick was a kindred spirit to his mother, who ultimately ended up introducing him to his now wife Deborah. Richard Patrick moved to Alabama to be closer to his mother and provide support. Richard Patrick and his wife Deborah still reside on the beautiful piece of land that Dee so lovingly cultivated. They are reminded of Dee every spring when the yellow daffodils that she planted there come into bloom.

Dee’s health started to deteriorate, so she came back to Massachusetts, residing in several North Shore communities over the years. Lastly, in Rockport, MA where she met many friends and enjoyed the smell and breeze of the ocean air. Thanks to ancestery.com and the countless time and effort put in by Dee’s sister-in-law Michelle Tremblay, Dee was reunited with her younger brother Denis Tremblay Jr. whom she knew of but never met. The strong familial traits were noticed by all when Dee and Denis got together, they shared the same signature “Tremblay” nose. Although they lived on opposite ends of the country, Dee and Denis remained close throughout her final years. Nothing brought Dee more joy than realizing she had family that she had never met, who loved her dearly. Denis Tremblay and his wife Michelle were able to see Dee one last time in September 2019, a memory they will hold dear.

Dee battled many illnesses throughout her life, she was a breast cancer survivor, living with diabetes and these ailments took a great toll on her quality of life as she aged. The last few years of her life she faced many difficulties with dementia, thus requiring her to live the last nine months in a skilled nursing facility in Danvers, MA. She enjoyed many visits from family and her spiritual brothers and sisters while living there and continued to have a smile on her face. You could find her flirting with doctors and poking fun and making jokes with the caregivers. Although Dee struggled with dementia, she never lost her pizazz and joie de vivre. Dee had a very special bond with her son Michael and his wife Debbie, both visiting her frequently where they enjoyed reading bible verses and sharing spiritual conversation. Dee shared a strong faith-based bond with both Michael and Debbie which brought her much comfort. She left us unexpectedly, leaving a large void in the lives of many of her family and loved ones. Dee was predeceased by her mother Anne Louise Maxfield, her father Denis Tremblay Sr. and her sister Paulette “RED” Tremblay. She is survived by her three children, Michael Patrick O’Donnell and wife Debbie O’Donnell, son Richard Patrick O’Donnell and wife Deborah O’Donnell, daughter Carleen Marie MacKay and husband Keith Sultzbach. She is also survived by her nine grandchildren and three great grandchildren.

Dee’s final wishes were to have her ashes spread a top her beloved home on Cheaha Mountain in Alabama. In lieu of flowers, the family asks for donations instead to the American Diabetes Association, www.diabetes.org/donate.