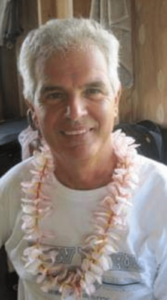 Dennis was a thoughtful man of the world. He went through many phases in his life: hippie, professional, builder, traveller, spiritual seeker, gardener, man of leisure and nature, critical contemplator. He lived in some of the most revered regions of the country including Wellesley, Boston, silicon valley, San Francisco east bay, Cape Cod, and Hawaii. He was a mechanical engineer who retired early to a nomadic and modest lifestyle. He was an explorer of the world, mind, body, and spirit; and fearless to try new things. He was a seeker of truth and often skeptical. He always kept his options open about what to do next and what the future could bring. Perhaps his soul mate was Maui where he spent most of his time near the end. Dennis passed peacefully on March 8 following a brief battle with mesothelioma at 71 years old. He is survived by his mother Irene, his sister Shirley, nieces Kimberly, Lindsey, and Brittany, and his six children: Jennifer (and husband David), Adrienne (and husband Chris), Damien, Isa, Ebrahim, and Arjuna (with partner Caitlin). Dennis was also a caring and loving grandfather to his seven grandchildren — Evan, Eli, Megan, Katelyn and Stephen, Clark, and Aiden, and three stepchildren — Matthew, Christopher, and Jessica.
In a typical day with Dennis, he begins by greeting you with a sincere Good Morning and asks how you slept. He offers advice for sleeping and eating better and he warns of foods or chemicals to avoid. He makes you an omelette with veggies from the garden and extra eggs. He steps lightly outside, in bare feet, to greet the sky and the birds. He checks the weather on his phone, scrutinizing the radar signals. He sits with you in pure patience and repose to enjoy a coffee or two and a bar of chocolate (or two). But when it’s time to be productive he gets his hands dirty: often literally, by digging them into your yard to rescue a plant or to improve your irrigation system. He works as a mentor so next time you can do this without him. He praises the sunlight, the buds on the branches, and the robin who briefly graces your fence. He works continuously even when you are barely helping anymore and it has grown too dark to see anything; he works until the job is done right.
Now night has fallen on this life that he spent caring for others and exploring the beauty of the world. It’s time to rest.