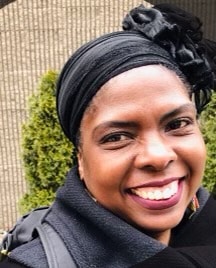 Dia Damali was born on June 13, 1967 in Ewarton, St. Catherine, Jamaica to the union of Blondel Lugg and Anglin McDermott. In 1974, she and her older brother Devon emigrated to Cambridge to live with their grandparents Augustine and Alvin Brooks.

Dia received her formal education at the Martin Luther King Jr. Grammar School, Cambridge Rindge and Latin School, and Boston University. As a precocious student, Dia read voraciously, asked questions, and loved a good debate. Her adult years were spent re-educating herself and pursuing interests that she valued. That intellectual curiosity led to many jobs: the City of Cambridge Youth Employment, Cambridge Savings Bank, Kinkos Printing, the Harvard Bookstore, Healthworks, the Boston Herald, WHDH – Channel 7, South End Press, The Women’s Institute, Cambridge Citywide Senior Center, Catering by Andrew, and finally as an innkeeper at The Bertram and Samuel Sewall Inns in Brookline.

Driven by her personal standard of excellence, Dia sacrificially poured herself into each job. No experience was wasted. She found a way to masterfully re-purpose every skill and life lesson. Although sometimes unconventional, she pursued her dreams boldly and tenaciously. Her ultimate dream was to one day open her own B&B and call it Blondel’s Child Inn.

Dia was a natural entrepreneur – ambitious, resourceful, progressive, and always reinventing herself. She launched a pop-up bookstore in her apartment on Fairmont Street in Cambridge, Next Frontier Books, that offered books from African diaspora authors. She researched and adopted a vegan lifestyle; she hosted annual Kwanzaa celebrations with friends; and she honored the legacy of her grandmother with memorial gatherings for family. She promoted wellness, and enjoyed Afrocentric art, gardening, traveling, and attending African music events and vegan festivals. Her passion for cooking and experimenting with different spices led to a catering side hustle, Attitude Cafe.

The community and family could also depend on Dia’s generous support. If she had the capacity to help you, she would, but she was also fiercely independent and self-sufficient. Even as a child, she served as a guide to an elderly blind congregant at the Apostolic Pentecostal Church, and she later mentored youth in Big Brothers Big Sisters of America.

Dia was light. Dia was love. She was a “mother”, sister, cousin, aunt, and friend to many. She was the embodiment of Black girl magic. Her gentle spirit and joyful smile made you feel safe, but she could be playful and sassy too. She didn’t just walk, she sashayed. She relished quality time spent in engaging conversations and she accepted people for who they were, regardless of their life circumstance. She taught us how to emancipate ourselves from emotional, physical, and financial shackles. She exemplified forgiveness and encouraged us to live authentically.

Dia was a warrior that may have lost her worldly battle, but she fought it the way she wanted to and has been rewarded with reunification with her mother, two brothers Clive and Garth, aunts, beloved grandmother, and other family members who have gone on before her.

Blondel’s child and Anglin’s daughter Dia has transitioned, and while we may miss her, we will never forget the blessing she was to us all. A Celebration of Life tribute will be held on Saturday, August 28, at 1:00 PM at Magazine Beach, 668 Memorial Drive, Cambridge. All are welcome.