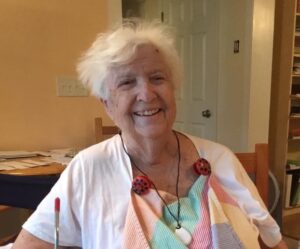 Diana Cade Gibney, 88, of Gloucester, MA, died Thursday, March 10 at the Kaplan House in Danvers, MA, after living through cancer for 22 years.

Born in Waban, MA on October 28, 1933 during the Great Depression, Diana attended Southwestern (now Rhodes) College in Memphis, TN and graduated cum laude with a B.A. in French Languages and Literature. After college she sailed with her brother and best friend to Paris for a summer, where she studied at the Sorbonne. She later moved to Boston and worked at Houghton Mifflin Company where she met and married Stuart Hamilton Cleveland, a sociology editor, in 1958. Tragically, he died suddenly in 1963, leaving Diana to care for their two young children. Her husband’s colleagues taught her the skills she needed to become an expert freelance copy editor and proofreader for the next 50 years.

Over a period of many years she loved times traveling with her daughter. More than any other place she loved Florida, where she and her daughter lived for several years, and her favorite city was Delray Beach. After returning to Gloucester in her 80s, Diana loved riding around and going out to eat at the family’s favorite place, Cape Ann Coffees.

A self-confessed introvert, Diana was an avid reader of all subjects, especially obscure authors and biographies of writers and poets. She loved the New York Times’ acrostics puzzles, sampling foods of all kinds, drawing and watching or reading murder mysteries. Above all she loved spending time with her children.

After her initial ovarian cancer diagnosis and treatment in 1999, Diana enjoyed many happy years of remission until a reoccurrence in 2015, when she generously participated in two clinical research trials at Mass General Hospital. Always gifted with a dry wit and great sense of humor, her oncologist Dr. Penson described Diana as “having a marvelous joie de vivre, a delightful sense of the absurd, and the most resilient spirit.” Her nurse practitioner, Jenny, remembers Diana’s “infectious smile and demeanor; she always brought a smile to my face. Incredibly strong, she was not defined by her illness. A favorite memory is when we sung her Happy Birthday via Zoom and she was dancing in her hospital bed.”

In lieu of flowers, donations may be sent to the Gynecologic Oncology Research Fund @ MGH c/o Richard Penson, 55 Fruit St., Yawkey Center, Boston, MA, 02114. A private memorial is planned for later this spring.