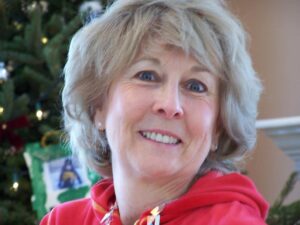 Diane Marie (Abely) Grant, 74, passed away peacefully at the Kaplan Family Hospice House in Danvers, MA on November 20, 2019. Diane was born in Boston, grew up in Winthrop and attended Cardinal Cushing College in Brookline, MA on a full academic scholarship. After college, Diane was a flight attendant for American Airlines, married and upon the birth of her first child began her true lifetime profession as SUPERMOM. Diane later moved to Sarasota, Florida, where she raised her three children on a small farm. Her Christmas cookies were legendary, and she baked a mean French baguette. She was ahead of her time in matters of wellness, adopting a vegetarian diet, running road races, playing tennis, studying flower essences, cross country skiing, and meditating daily.

With her two eldest children out of the nest, Diane moved back to New England in the early 1990s, this time to South Hamilton, MA. She continued as SUPERMOM, while also working as a real estate appraiser, and subsequently earning her Master of Education in Waldorf Education from Antioch University. After spending time as a Waldorf teacher, she recaptured her love of travel, flying around the world while working as a flight attendant on a private corporate jet. She had one more capstone of her life’s work, however, that came when she became SUPER MIMI. Her fortunate grandchildren were the recipients of many a Mimi Adventure, frequent ice cream stops and special time in her home. If you needed to talk, Diane always had time for a chat and an endless enthusiasm for the latest news from her children, grandchildren and friends. Despite a change in her mobility in recent years, Mimi was a fixture on the Boxford and Masconomet sports fields, cheering on her grandchildren in all their sports, travelling to New York for her grandsons’ birthday parties or hopping a train to Newport to visit with her daughter. She was an independent, joyful, loving, curious and supportive woman who touched the lives those who knew her.

Diane was the daughter of the late Florence (Kiely) and Paul Abely of Winthrop, MA and the sister of the late Patricia (Abely) Sanford of Acton, MA.
She is survived by her loving children, Robyn Earley (Troy Rittenhouse) of Newport, RI, Nadine (Earley) McCall and son-in-law Robert McCall of Boxford, MA, and Robert Earley and daughter-in-law Montira (Rattanavijit) Earley of Brooklyn, NY. She is also survived by a sister Christine (Abely) Ozahowski. “Mimi” will be forever missed by her grandchildren, Jack, Sam & Morgan McCall of Boxford, MA and Weston & Alden Earley of Brooklyn, NY.
In lieu of flowers, donations can be made to Spaulding Rehabilitation Network Adaptive Sports Programs or the Kaplan Family Hospice House. A celebration of life is planned in the new year, please visit the following link: http://evite.me/7eqabURW89