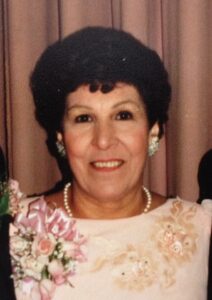 Born in Boston, Marge, as she was fondly known, was the daughter of the late Guiseppe and Sebastiana Abramo and was one of six siblings. She attended Boston Girls’ High School and was a graduate of Medford High School. Marge was employed by the former Colonial Hilton as a banquet waitress before retiring to Florida in 1984.

She was the wife of the late Gerard O. Lavoie and the late William C. Barclay. Marge and Gerard parented 10 children. She was mother to one step daughter.

Marge was predeceased by her son Roy. She leaves 10 children: Theresa Collier and her partner Mark Plotczyk of Shrewsbury, MA; Laura Stinnette and her husband Richard of Russell, MA; Annette Bilo and her husband Antonio of Georgetown, MA; Paulette Lavoie Beebe, the wife of the late Frederick of Hull, MA; Jean Ayles and husband Thomas of Hamilton, MA; Joseph Lavoie of Danvers, MA; Philip Lavoie of Beverly, MA; Carol Lavoie of Danvers, MA; David Lavoie and fiancée, Helene Langley of Kennebunkport, ME; and Alison Titcomb, Ewing, NH. Also, she is survived by her sister Josephine Parziali of Santa Barbara, CA, and sisters-in-law, Marion Abramo of Brunswick, ME and Ruth Abramo of Lynnfield, MA. In addition, she is survived by 18 grandchildren, 29 great grandchildren.

Marge lived a long, socially active and adventurous life. She and her late husband Bill traveled throughout North America as well as Europe. She spent many happy years in Park City in Davie, FL organizing social activities as president of several committees. She loved singing, acting, dancing and coordinating various shows and dinner dances.

There are no calling hours. Services are private. Memorial contributions may be made in Marge’s name to Care Dimensions, 75 Sylvan Street, B-102, Danvers, MA 01923.