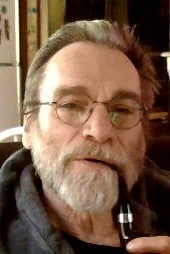 On Thursday, August, 26, 2021, Donald McClentic, loving partner and father, peacefully passed away in
his home after a swift, yet vicious, battle with lung cancer. He was 64 years old.

Don was a lifelong resident of Massachusetts, living in Pepperell the past twenty years of his life. He was
a skilled craftsman by trade, and took pride in his work at Carvers Guild for more than thirty-seven
years. Don was a talented artist and left an impressive catalog of sketches, sculptures, carvings, and
stylized paintings, reflective of his fragmented and chaotic view of the world. Don enjoyed a fine bowl of
tropical Cavendish, indoor gardening, expanding his audio and video collections, occasionally playing the
flute, and adeptly taking the protagonist&#39;s view of a good conspiracy theory. His alternative views, dark
humor, compassion, talents, fire, and love are greatly missed.

With respect to Don&#39;s need for privacy, there were no calling hours. A tribute to his life and art is
planned, to be announced in the coming months.