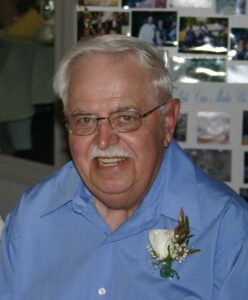 Donald Raymond, 87, passed away on April 16th at AdviniaCare in Wilmington, MA due to complications of COVID-19. He was born on June 16, 1932 in New Bedford, MA and was the son of the late Lena (Cormier) and William Raymond. In 1955, Donald married Carol Joan Raymond and celebrated 61 years of marriage prior to her death in 2017. He lived in the New Bedford area for most of his life and spent his later years in Lansdale, Pennsylvania.
He was preceded in death by his wife Carol, daughters Donna and Christine and by his son-in-law Joseph Michael Noble.
Donald is survived by his children: son, Michael D. Raymond and his wife Cynthia; daughters, Coleen (Raymond) Noble, Anne Raymond, and Michelle (Raymond) Bray and her husband Terence. He is also survived by his sister-in-law Ida Raymond.

He enjoyed spending time with his grandchildren: Matthew, Christopher, Renee and Megan and his great-grandchild, Ian. He loved listening to big-band music, playing bingo, gardening, being with his pets and playing the lottery. Donald worked for Alden Corporation in New Bedford for 42 years until his retirement in 1990.
Donald was a veteran of the Korean War where he was awarded the Bronze Star, United Nations Service and National Defense Service medals.
He leaves an emptiness in many hearts and in its place remain many wonderful memories.

Funeral services will be held at a later date in his hometown of New Bedford, Massachusetts due to current gathering restrictions.