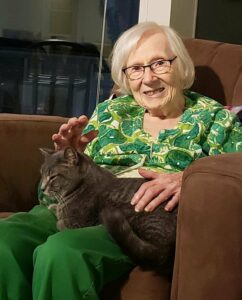 Doris E. Weimer, 90, of Melrose, Massachusetts, died peacefully in her sleep on December 12, 2021, after several weeks of hospice care and a long battle with dementia. Born January 29, 1931, in Flora, Indiana, Doris was the youngest of seven children of Elva (née Wagoner) and Marion Kinzie.

Doris was the proud valedictorian of the Central High School class of 1949 in North Manchester, IN. She completed two years at Manchester College before her marriage to Bob Weimer, and then had five children. After her divorce, she finished college and earned her Masters in Psychology at the University of Nebraska. She worked for many years at the Regional Center psychiatric hospital in Lincoln, NE as a psychiatric tech aide where she received the Woods Award for outstanding service. She was also a prolific volunteer including many years with the Girl Scouts as troop leader, cookie chairperson, board member, and bookkeeper.
After retiring, Doris moved to Beverly, Massachusetts in 1997 to be closer to her daughter and grandchildren. Doris was well known for her keen organizing skills and prolific flower boxes at Apple Village in Beverly, for making prodigious amounts of peanut brittle each year for the Beverly UMC church fair, and for her love of dancing.
Doris is survived by three children, Robyn Weimer of Poulsbo, WA, Diane Gonzales and husband Joel of Melrose, MA, Allan Weimer and husband David of Phoenix, AZ; four grandchildren, Michaela and Christopher Gonzales of Malden, MA and Durham, NC, Bryan and Laura Weimer of Poulsbo, WA; and many nieces and nephews. Doris was preceded in death by her parents; two children, Greg and Katie, both in 1963; two brothers, Vernon and Dale Kinzie; and four sisters, Ruth Amos, Vada Longenecker, Freda Hulme, and Wilma Parmerlee.
Services for Doris will be held at a later date.
In lieu of flowers, memorial donations can be made to the Cure Alzheimer’s Fund, https://curealz.org/