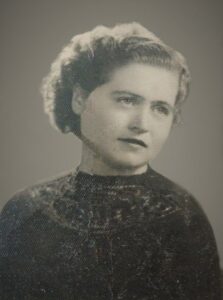 Edilia DiStefano of Needham, formerly of Quincy, passed away Monday, August 24th at Beth Israel Boston after a 21 year battle with kidney failure. She would have turned 89 on September 1st. She was the beloved wife of the late Giulio DiStefano. Born in Italy on September 1, 1931, she was the loving daughter of the late Luciano and Rosa (DeSantis) DiPietro. Edilia immigrated from Italy in 1968 with her husband and daughter and settled in Quincy for many years. She was a factory worker for a Boston candy company and Howard Johnsons and made many friends along the way. She was an avid cook and baker with specialties in homemade pasta and pizzelle cookies. Those in her circle were always recipients of her wonderful cooking. In addition to her husband, Edilia is survived by her daughters, Clotilde Gigliotti of Natick and Julie Friess and her husband Andy of Attleboro. She was the cherished Nanna of Kristen, Stephanie, Nicolas and Abigail. Loving sister of the late Mario DiPietro and his late wife, Lucia of Weymouth, Maria Mocchetti and her late husband Delio of Italy, the late Giuseppe DiPietro and his wife Concetta of Pembroke, Imelda Tiberi and her husband Ivan of Quincy, Ilva Volpe and her husband Pietro of Braintree. She is also survived by her in-laws in Italy, the late Mario and the late Lilliana DiStefano and Orlando and Iolanda DiStefano and many nieces and nephews. In lieu of flowers, donations may be made in Edilia’s memory to The National Kidney Foundation, 30 East 33rd Street, New York, NY 10016.