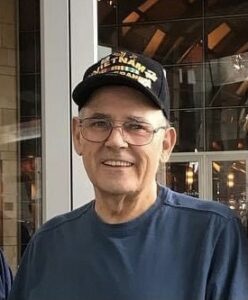 Edmond A. “Moe” Lausier, 74, passed away peacefully on June 29 th at home with his loving
family by his side after a period of declining health. He was the beloved husband of the love of
his life, Rita Y. “Dolly” Bergeron with whom he shared 53 years of marriage.

Moe was born in Lowell on July 3, 1946. He was the son of the late Edmond P. Lausier and
Marie R. (Mercier) Lausier. He was educated in the Tyngsboro and Lowell schools and received
an associate degree in business from Newbury Junior College.

Moe was a proud United States Army Veteran. He served in Vietnam from 1965-1967 during
which time he was awarded the Vietnam Service Medal, two Bronze Service Stars, the National
Defense Service Medal, the Republic of Vietnam Campaign Medal and the Sharpshooter Badge.
When thanked for his service he would always reply with an enthusiastic “I’d do it again”.

Moe loved watching Boston sports, going to casinos, playing the lottery, and most of all,
spending time with his family.

In addition to his wife, he leaves his daughter and son-in-law, Tracy and Kevin Turner, with
whom he resided, and his son, Kevin Lausier, his best friend whom he affectionately referred to
as “the boy”. He was the proud “Pepere” to eight grandchildren who meant the world to him;
Samantha, Jackson, Kevin (Jordan), Emily (Brett), Dylan, and Matthew (Sarah) Turner, as well as
Amanda and Brianna Lausier; and two great-granddaughters, Lulu and Georgie Turner. He also
leaves his special Godchild, Erica Keeley. Additionally, he leaves his brother and sister-in-law,
Robert and Jeannette Lausier, and sisters Edna Gauthier, Marie (Donald) Paquette, Rita
(Michael) Clark, Helen Mayall, Lucille (Daniel) Lavigne, Claire (Kevin) Bergeron and many nieces
and nephews. He was the brother of the late Raymond “George” (Simone) Lausier and
Thaddee A. Lausier.

Moe’s family would like to thank the staff at Merrimack Valley Hospice for their care and
compassion during this time.

In accordance with his wishes, a celebration of life will be private. In lieu of flowers, donations
in his name can be made to Home Base, Veteran and Family Care, One Constitution Wharf,
Suite 140, Charlestown, MA 02129, www.homebase.org.