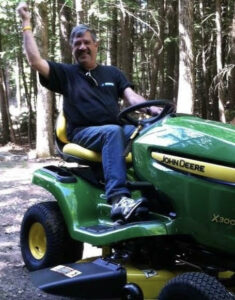 Edward Angelo DeGurski Sr., a long time resident of Medford, MA, passed away on September 14, 2018 at the age of 60 after a lengthy and hard-fought battle with cancer. Born and raised in Malden, he went to Malden Catholic where he graduated in 1976. During that time, he met his soulmate Mary (Smith) DeGurski, his loving wife of 36 years. Together, they had two children, Kathleen and Edward, who he adored.

Edward spent most of his summers with Mary in Barrington NH where they had a house and could relax. Edward has always worked in the gas heating field, starting out in the field and then managing. He taught at the Peterson School for many years. Edward enjoyed annual trips to Cooperstown NY, spending time with his family and friends, playing with his dog Guinness, and just enjoying life. Edward was a man full of jokes and wit but would give the shirt off his back to anyone in need. Edward is survived by his parents Edward and Rosalie (Abatematteo) DeGurski, his mother-in-law Annette (Canole) Smith, his brother Stephen DeGurski and his husband Michael Begay, his wife and children, as well as many, nieces and nephews, aunts and uncles, in-laws, cousins and loving friends. He is predeceased by his father-in-law Joseph “Reggie” Francis Smith.

Edward’s body will be cremated by Boston Cremation, and a service in honor of his life will be held at the chapel there at 287 Main Street, Malden, MA 02148 on September 28, 2018 from 9:00AM to 12:00PM. Friends and family are respectfully invited to attend.

In lieu of flowers, the family asks that donations be made in Edward’s memory to the Dana Farber Cancer Institute, because their tireless efforts there made all the difference in the world.