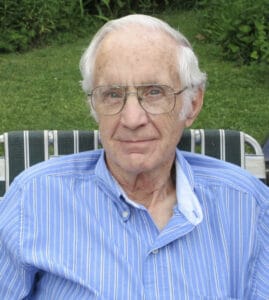 Edward Charles Harnden died peacefully at his home in Groveland, MA on April 28, 2022 with his wife by his side.  Ed was born in Saugus, MA September 17, 1941 the son of Edna and John Harnden.  He graduated from Saugus High School in 1959 and entered the U.S. Navy serving in Argentia, New Foundland.  After attending East Coast Aerotech, he was employed as an aircraft mechanic for Northeast Airlines and then Delta Airlines, where he spent 34 years.

Ed married Susan MacLaren of Saugus, MA September 7, 1963.  During their 58 years of marriage, they lived in Georgia and Massachusetts, having three children – Kathy Chiarello, Linda Millette and Jeni Harnden-Koehler.  They were blessed with 6 grandchildren – Danny Harnden, Lea Chiarello, Alex Koehler, Erin Millette, Lukas Koehler and Kaylin Koehler.  Ed grew close with his sons-in-law Brian Millette and Stephan Koehler with whom he shared an interest in collecting tools and DIY projects.

His younger sister, Karen Pearson, currently resides in Bonaire, Netherlands Antilles where she scuba dives and raises horses and donkeys.  His Sister-in-law Jackie MacLaren lives in Palmyra, ME and Ed had a number of nieces and nephews spread throughout the globe.

A memorial service will be held at the Groveland Congregational Church on a date to be announced later.