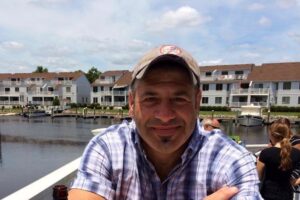 Edward “Ed” Anthony Bartnikowski, 56, most recently of Brodnax, VA, passed away on July 20th, 2021 peacefully at his daughter’s home in Massachusetts. Ed was born on June 17th, 1965 to Peter and Arlene in Chicago, IL. After graduating from Ellis Tech in Connecticut 1983, he went into the field of engineering. After graduation, he started working as a civilian employee for the United States Navy working on submarines. Due to his line of work he always traveled and lived all along the East Coast. His current job at Gerdau in Virginia is where he left behind close friends and co-workers. In 1988, he met his wife Kristi, and they wed in 1990, going on to have three children, Jordan, Molly, and Dominic.

Ed was a force of nature, determined to provide for his family and give them the life he felt they deserved. His family meant more to him than anything else in the world, something he often mentioned. He was unendingly proud of Jordan, Molly, and Dominic and always tried his best to support them. Ed was also passionate about building cars and riding his Harley Davidson. He would always be found in his shop where his latest project, a Jeep CJ7, was being built. Ed was a diehard New York Giants and New York Yankees fan; he was afraid of needles so got a NY Giants tooth instead to show his fandom. Anyone who knew Ed knew that he was the most loving father a family could ask for. Ed was predeceased in death by his father Peter, his mother Arlene, and his younger sister Lori. He is survived by his siblings Lana of Westhampton NY, Peter of Westerly, RI, and Paul of Brodnax, VA; his children Jordan and son-in-law Chris of Taunton, MA, Molly and son-in-law Nick of North Attleboro, MA, and Dominic of Charleston, SC; his former wife Kristi of Charleston, SC; his niece Loryn of Pensacola, FL; his nieces and nephews Lawrence, Emma, and Luke of Westhampton, NY; and several close friends and co-workers.

All are invited to attend his visitation on Tuesday, July 27, 2021 from 9-11am at Boston Cremation, 115 North Main Street, Mansfield, MA 02048. A Celebration of Ed’s life will begin at 11am. Burial will be private. The family requests in lieu of flowers, please send donations in Ed’s memory to: American Kidney Fund, 11921 Rockville Pike, Suite 200, Rockville, MD 20852 or visit: www.kidneyfund.org